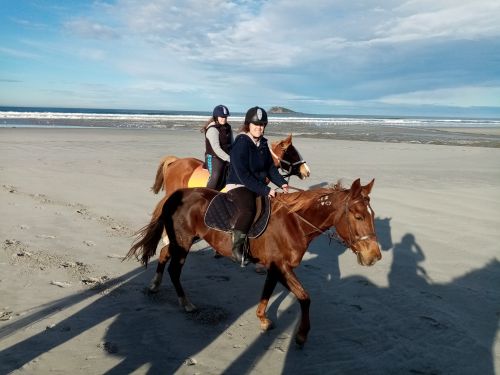 Sparkling life, or Sparkles we call her is our 11 year old, liver chestnut 14.2hh mare. She trialed and then spent seven years as a broodmare.

I purchased Sparkles as a horse for my 8 year old confident beginner son to ride and own.

She was six months backed when I got her in February 2021 and it's fair to say things were a little tough to start. She didn't know what a feed bucket was, a cover was slightly frightening and the beach or a fire hydrant she had never seen. A rustle was cause for alarm, but she was kind and under pressure sensible, so deserved a chance.

I knew she needed desensitised and miles. On the very first day I picked her up it took me a long time to get her off the float because she was used to an angle load not a straight load float. Not an ideal introduction to your new life, however from there she continued to exceed my expectations.

It's fair to say initial days were spent exploring and exposing, which takes time, but she was eager to please, brave, trusting, loveable and kind.

My son, who has been getting lessons, has recently started riding her because both are ready to grow together now. He recently had his first experience off the lead down the beach and has been riding her alone since. I am so proud of both of them, they have done it together.

In between becoming suitable for my son, Sparkles became a bit of a community pony. Us horse mums all rode her, from the nervous and beginner to the experienced and confident. This all contributed to her ongoing development as a kids mount.

Sparkles has been to a show, on an overnight trek, down the road, over jumps and to the beach. All totally different to her former life and she has taken it all in her stride.

She certainly knows what a feed bucket is now (don't mess with her at feeding time if your another horse) and is first to meet you at the gate. She has been hacked near gun ranges without flinching and even ridden through bending poles, cones, noodles and cordons at pony club grounds.

She is the cuddliest thing when you get to know her and I'm glad to have been able to give her a second or third life.

This will be my sons and Sparkles first season together at pony club and he is aspiring to take her to a local gymkhana, which I am hoping will be positive for both. I have every bit of faith their future together will be successful.