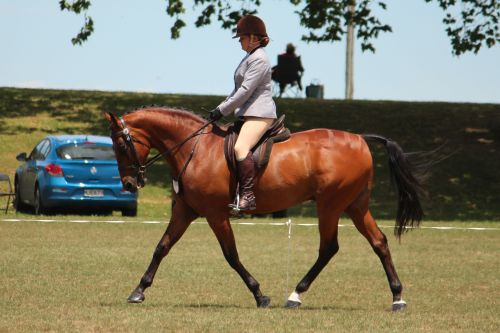 Claire Madden’s relationship with Major Ouch sounds like a marriage.

‘We’ll have been together 10 years in March,” she says.

And it’s a relationship that has flourished though the now 14-year-old son of Art Major is, as Claire puts it, “a typical male”.

“He pretends to be grumpy and puts his ears back. We call him Major Grouch! But secretly he loves attention and people.”

When she got him it looked like his racing days were over. Owners John and Lynne Street (Lincoln Farms) and Copy That’s New Zealand Cup-winning trainer Ray Green had won four races with him.

Claire’s partner Roydon Downey was working at Lincoln Farms at the time and it was agreed that Major Ouch would re-locate to their place at Kumeu, north of Auckland to begin his ridden career.

He was broken to saddle and was enjoying his new life. That got Claire thinking.

“We were at a saddle pace at the Kumeu Trotting Club and he just kept extending his lead over the ​standardbreds in the race and we thought there might be a bit of life left in the old boy yet.”

She then approached the Streets with a view of a return to the racetrack. They struck a deal ​to race Ouch in partnership.

Major Ouch did not race between September 2011 and March 2014 but when he did, as a six-year-old,  he resumed in fine fashion.

“Here's a training performance and a half," commentator Aaron White said as the $19 outsider cleared out to a comfortable win on the grass at Pukekohe Park.

Roydon’s father Errol Downey was the trainer at the time, with Roydon taking over the next year.

Major Ouch then had a dual life – “he loves variety and work”.

“Sometimes we’d go off to the races on a Friday or Saturday and then do an A and P show or an endurance event at the weekend,” says Claire.

Major Ouch won twice for the Downeys and six times overall from 32 starts, with his last victory being the 2014 Taranaki Cup.

Since his second retirement from racing Major Ouch has still been used a galloping pacemaker for the other racehorses and ​has been kept busy ​competing.

“We’ve been to Horse of the Year a few times,” says Claire, “he does side saddle, dressage and we show him. It was in-hand to start with but his canter is coming along ​his is now placing well outside of just the standardbred ring.”

Though regularly placed at A&P Shows Claire says the best result so far was when he was named  Supreme Champion at the North Island Standardbred Championship ​Show in 2020 and 2021.

Covid restrictions have put a dampener on shows in the north, ​finally making their show ring return at Te Kauwhata A&P in early January 2022 taking home Champion Ridden Standardbred with their previous event being  the North Island Championship Show in April 2021. It means they may be a bit under-prepared for next March’s HOY.

“We might only get two shows in before then …. of course you go to win but if we got into the top four ribbon I’d be rapt.”

Despite his occasional cantankerous ​moment Major Ouch is a favourite and as they approach a decade  together they are still good mates.