See HRNZ Information for Peeping Thru 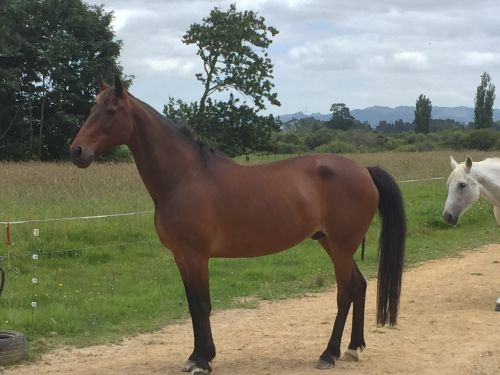 We needed a horse at work to trial adapting some remote blood sampling apparatus, previously developed for Red Deer.

As this may have involved catheters we decided to rescue one rather than borrow from a friend.

A colleague decided that we all had to club together to buy George. I had horses already and had been doing all the work with him, thus I was the one who got to take George home.

Straight off the track, having never been ridden, George took quickly to his change in occupation.

When I decided to try endurance at the World Masters Games George was the one I chose, and after a few weeks training we ended up winning the gold medal in the 20km!

I had the endurance bug and George was right there with me as I moved up the distances. 25 then 40 and at last our first 80km completion.

Unfortunately shortly after this George was diagnosed with arthritis and stepped back into semi-retirement, as I pursued my endurance career with newly purchased part Arab, Lace.

Lace has become the love of George’s life, supporting her passion.

Very successful in endurance Lace has gone on to have three foals, George was father to them in every respect except genetically. Protecting them savagely, being calm and safe when they were frightened or worried, even teaching them to pick up and wave buckets around!

Now these babies are older George has been instrumental in their education, he is the one to teach them to lead from a ridden horse, and to then ensure they stay with that horse when being led along a busy road, nothing like having a standardbred for this job. The young horses have a second lead tied around George’s neck, a backstop if they try to pull away a tow when they try to stop.  They soon learn to keep up with George, not that easy as he has a good walk even now. Just yesterday the youngest had his first road walk with Uncle George.

Now nearly 25 years old George is the one that gets ridden when there are beginners around, anyone can ride George. Having had horses for 45 years, George is the one I have had longest and I hope he has a few years left yet.