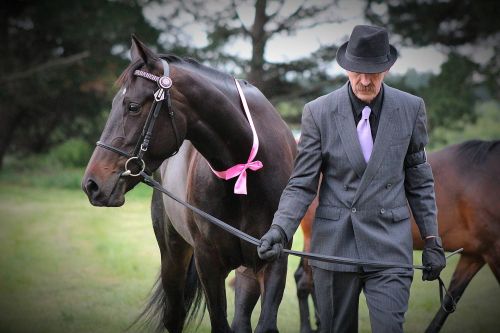 Cardi was bred to be a harness race horse some 6 years ago now.

She qualified as a two year old but never raced as she broke a bone in her knee. Only through luck of a friend of the trainer did Cardi get a second chance.

A lady called Philippa got hold of her and paid for Cardi to be operated on to fix the knee. Cardi then went to my friend Jackie's for rehab. This included spending three months in a stable box before moving into a paddock. Cardi spent a total of 12 months at Jackie's recovering.

Cardi became a member of my family back in the winter of 2019. I was asked by Jackie  if I wanted a new show horse and took the opportunity of having this mare. A lovely natured mare at home that just loves attention (and to be fed!!).

Cardi went to her first inhand show in September of that year at Pegasus and came home with Champion Inhand. A great start to her show career.

We competed at several shows over the next two seasons (2019-2021) winning two Championship ribbons and a Reserve Champion ribbon and several other top finishes. There have been some aerobatics at times but that all comes with the learning curve of being in the show ring.

This season there has only been limited shows due to covid and Cardi has continued to show improvement. Finishing with a 2nd, a 3rd and a 1st in her three mares classes at the A& P Shows. After winning the mares class at the Courtney show she went on to get Reserve Champion, her best result at a A&P level in her showing career.