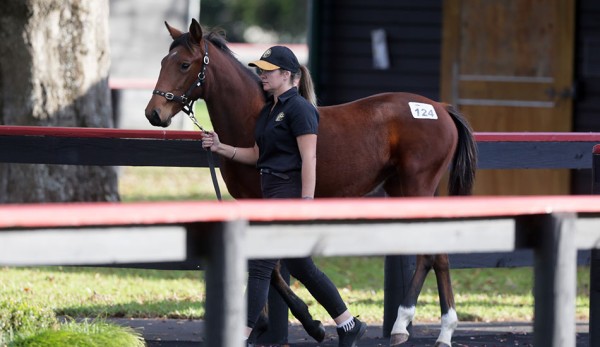 Woodlands and Alabar dominate the New Zealand Bloodstock Standardbred sale which has over 100 lots.

“We breed around 150 foals a year between Paul and Mary (Kenny), my own and some of our staff even having a mare or two," says Woodlands Stud boss Andrew Grierson, "we simply don’t have enough boxes to prepare that many horses for the yearling sales."

“Next year we will have over 40 in our draft for the yearling sales and that is a huge job.

It's a similar scenario for Alabar.

"We breed 60 to 70 a year and we breed to sell," says Alabar boss Graeme Henley.

Forty of their weanlings will go under the hammer this week.

"We can't keep them all at our place over the winter and it enables us to showcase new stallions like Captain Crunch."

Henley is particularly excited about Lot 92, a Captain Crunch - Princess Arts filly, while Woodlands is expecting one of its star turns to be Lot 52, a sister to Spanish Armada.

Grierson understands there is a perception that the weanling sales are for the less commercially bred horses and while that is sometimes true that doesn’t define the end product on the racetrack.

“Everybody knows we sold Copy That for $6000 at that sale and also Hard Copy. And a filly like Partyon, who was a massive success, was sold here,” says Grierson.

“So we are happy enough to offer a filly like Spanish Armada’s sister because not only does it attract people to the sale but she will make good money.”

Grierson says Australian interest in their weanlings has been strong in the last few years and with Thursday’s sale the day before the new, revamped Auckland and Rowe Cups meeting he thinks that will be strong again.

“But I think there is a real opportunity at this sale,” he explains, “and that is particularly for the younger trainers or maybe those trainers who find it hard to buy the horses they want at the yearling sale."

Henley says : "There are also pinhooking opportunities for some buyers ....it's a lot more economical than buying yearlings."

All purchases at the sale will also be eligible for the lucrative Harness Million series.

There will be a parade of weanlings at Karaka at 1.30pm on Wednesday while the sale itself starts at noon on Thursday.