The hot favourite overcame a 20m handicap in the 2200m event and clawed his way past a brave Kango in the final stages on a rain-soaked track, with Bad To The Bone third.

The winner is of course co-trained and driven by Mark Purdon, who was thrilled to win the race named in honour of his legendary father.

“It means a lot to us and it is hard to believe Dad has been gone over three months now,” said Purdon. 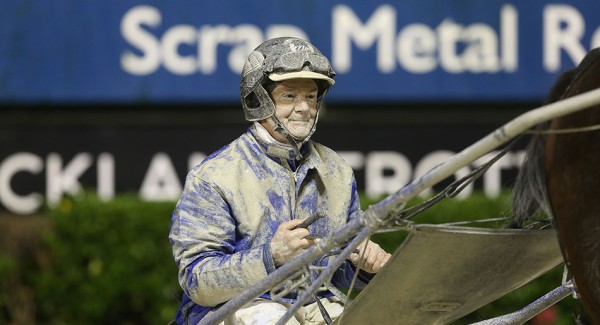 Sentiment aside Purdon was also satisfied with the performance of Self Assured, especially how he handled his first standing start since the New Zealand Cup in November.

“He won the race at the start he began that well,” said Purdon.

“I didn’t expect him to be up so handy and that meant he was able to catch the leaders which would have been a lot harder from further back.”

Those sort of standing start manners will be crucial next Friday in the $400,000 Trillian Trust Auckland Cup, especially as Self Assured will be in among other runners at the start rather than back on the 20m mark solo.

The win saw Self Assured into $1.40 to win the Cup but the first four home in the Cambridge Flying Mile last week are going to add considerable depth to the field.

While winning races at Alexandra Park is second nature to Purdon it was only the second time for Samantha Ottley when Monaco Grace won the $50,000 Magness Benrow Sires’ Stakes Magnifique.

Ottley handled the filly, who is trained by Mark Jones, a treat getting her off the gate to lead then trail and use the passing lane to hold out Queen Of Diamonds.

Monaco Grace went into the race a maiden, albeit a very good one placed in group 2 races and Ottley says she should keep improving to be an Oaks filly later in the season.

“My only other winner here was Rocker Band a few years ago and it has sometimes taken me a while to get used to driving up here and going the other way but I enjoy it,” says Ottley, who last week registered her 600th career driving success.

“It sounds like a lot of wins and I guess it is but I am not getting too ahead of myself, I’d be happy to get to 700 wins,” she says when asked about the 1000-win club.