Sprinting has never really been Sundees Son’s strength but he did it well enough to just win another Group 1 in the $100,000 Anzac Cup at Alexandra Park on Friday night.

The champion trotter sprung two surprises in the 2200m mobile, first by holding Bolt For Brilliance at the start then by being allowed to dawdle through the middle stages of the race in a 68-second half.

That was partly due to the waterlogged Alexandra Park track, also because driver John Dunn decided an easy run wouldn’t do him any harm leading into next Friday’s campaign-ending Rowe Cup.

And while he achieved the desired result Sundees Son was pushed far closer than usual by Bolt For Brilliance, who relished the race being turned into a sprint home. 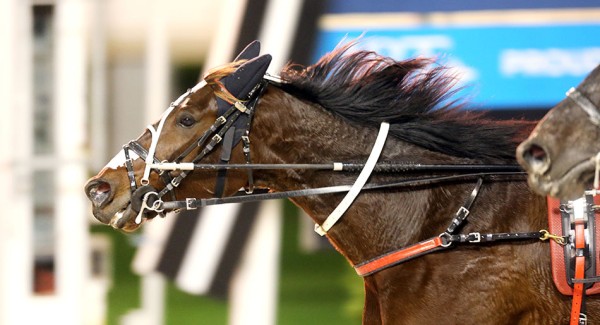 He would have been awfully strange seeing Sundees Son being beaten when if front and co-trainer Robert Dunn admitted afterwards it was a case of getting a result as easily as possible.

“I think we all know staying is his forte and next week Johnny won’t drive him so pretty,” says Dunn.

“But he still won it and it shows you what a good horse Bolt is.”

Midnight Dash held third while Kimkar Dash earned her connections a healthy return for supporting the race by finishing fourth.

The other well supported runner in the race Matua Tana showed enormous speed but galloped several times and cut himself during one of those who will need to heal quickly to be at his best for the Rowe Cup next Friday.

His trainer Paul Nairn had a far better result in the night’s other major trot when Masterly destroyed his opponents in the $70,000 Lone Star Sires’ Championship.

The race changed complexion enormously at the start when hot favourite Highgrove galloped and lost all chance but Masterly, having his first Alexandra Park start, trotted like he had been there 100 times.

Once he led for driver Bob Butt he never looked in danger of defeat and so commanding was his performance you could make a case even the best version of Highgrove might have struggled to come from behind to beat him.

“Obviously things changed when the favourite galloped but this is a pretty good horse,” says Nairn of Masterly, who won by six and three-quarter lengths.

“I actually bought him here on Wednesday and worked him and I am glad I did because it convinced me to make a few little gear alterations.

“He has always shown that talent, he works like a very good horse at home.”

The size of the victory and the fact Highgrove looked so ill at ease raised the possibility that Highgrove may not even start favourite for the Trotting Derby next Friday, especially with Double Delight set to join the boys in the classic.