Self Assured ticks all boxes 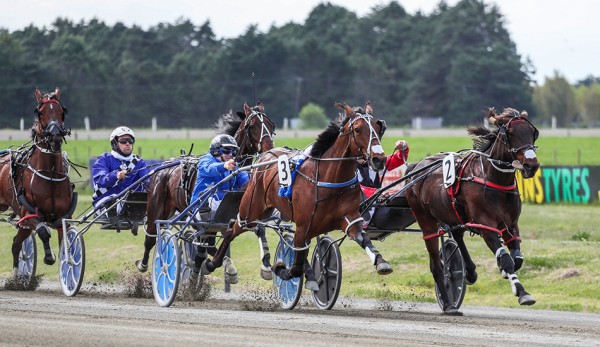 Self Assured ticked almost every box he could in the Flying Stakes at Ashburton on Monday but the IRT New Zealand Cup picture didn’t feel any clearer.

Because while his manners, times and most importantly race result were all what his connections would have wanted, it was hardly the domination punters would have been expecting after just 100m.

The hot favourite stepped away beautifully (big tick) in the 2400m standing start and was immediately gifted the front by Classie Brigade, putting Pembrook Playboy three back and effectively handing the race to Self Assured.

Or that was how it looked until Classie Brigade burst up the passing lane and headed the favourite at the 100m mark before Self Assured fought back.
Pembrook Playboy was never really clear in third while Laver was enormous in fourth thanks to a smart drive from Gerard O’Reilly.

Krug, who started eye-poppingly short in his first open class start in NZ, settled back and was never a chance so his run was best forgotten.

It was hard to know what to make of the win because Self Assured did everything right but he would have been expected to race clear and cruise home.

Had Self Assured paced those times and won by three lengths we would be engraving his name on the NZ Cup again already but the margin suggests there is still life in the Cup build-up yet.

Purdon said after the race Self Assured didn’t see Classie Brigade, whose own performance shouldn’t be underestimated, until it was almost too late but he regathered himself and dug deep just in time.

The performance suggested both mentally and physically he needs another outing before the Cup in two weeks, with Purdon suggesting the Cup trial on Wednesday week is more likely than the Kakoura Cup next Monday.

With South Coast Arden heading there, Copy That staying home to catch the plane south on Thursday week and Bad To The Bone possibly heading to the Sales race at Addington instead of the Kaikoura Cup the favourites for the great race could be arrivin at Cup day via very different paths.

While Self Assured opened the door of doubt for the Cup his stablemate Franco Indie left no doubt who should be pre-draw favourite for the Sires’ Stakes Final when he came from last to smash his heat rivals on Monday.

He was aided by being out of the early burn but still looks imperious and paced a 1:51.9 mile rate, his final 400m after sitting parked the later in 26.8 seconds.

That saw him tighten to $1.85 for the final and that could be even shorter come raceday if he draws better than Republican Party, who missed Monday and is out to $2.70 in a contest the bookies are pricing as a race in two.

Later in the card Adore Me’s little girl Darling Me paced a national record 1700m in a cracking mare’s race, her 1:51.4 mile confirming as all Monday’s sprints did that the move from 1609m to 1700m for Ashburton has been a smart one.