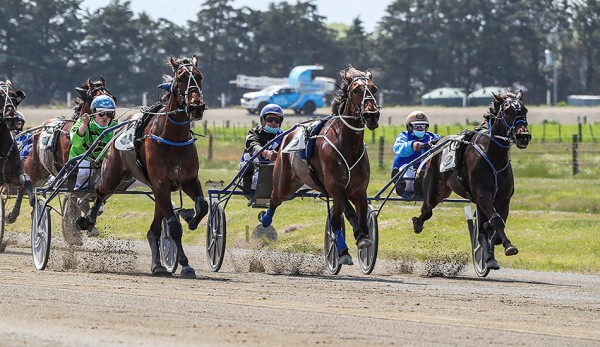 Muscle Mountain was so crushing at Ashburton on Monday he may have earned himself a busier November work load than was intended.

But co-trainer Greg Hope believes after the way he won the “What The Hill” Flying Sprint on Monday the big fella can handle a bit more racing in this stunning crop of open trotters.

Muscle Mountain was only in the race after blowing the start at his seasonal debut at Addington last time but he reminded everybody in harness racing just how good he is by sitting parked outside Majestic Man to grind him down in the straight.

The winner’s stablemate Midnight Dash was close up in third while Oscar Bonavena only battled into fourth and Bolt For Brilliance was never a chance after going back to last early on a day when the times were supersonic.

It wasn’t just time but the nature of the win that suggests Muscle Mountain is better than last season and Hope is willing to test that out.

“He has pulled up so well after that he will go to the Kaikoura meeting at Addington next Monday,” says Hope.

“He will likely be up against Sundees Son and back to a standing start but it will be good to test both of those things out before Cup week the week after.”

While Muscle Mountain heading to the Kaikoura meeting is no shock, especially as standing start practice could be crucial for the Dominion 11 days later, what is slightly more unexpected is Hope’s open mind about Cup week.

“Originally I didn’t think he could start twice during the week but I wouldn’t rule it out now,” he told HRNZ.

“So we will see how next Monday goes but I wouldn’t rule out him starting in the Free-For-All on Cup day before the Dominion because he is that much stronger than last campaign.

“Ben (son and driver) said he just jogged it today and could have gone a bit faster.”

The huge trotter really is a family affair with co-trainer and wife Nina spending up to an hour and a half some days massaging Muscle Mountain’s huge frame.

“We can tell he is a better horse than he used to be because when he was young the racing took so much out of him he would be buggered for a few days after,” says Greg.

“But now he seems to come through the races so much better and hopefully that gives us options.”

The win saw Muscle Mountain into $3.2 second favouritism for the Dominion on November 12, with Sundees Son drifting slightly to $1.70 to accommodate the percentage change.