Simply Sam was simply too good for his rivals in the Prudentia Law 2022 Winter Cup Handicap Pace (2700m) at Alexandra Park on Friday night.

The son of American Ideal settled off the pace for driver Tony Herlihy who bided his time towards the rear of the field before hopping on the back of Jack Tar when heading into the back straight for the final time.

The speed was on and Herlihy kept his cool four-wide with cover before steering his charge six-wide turning for home where Simply Sam quickly gathered in his opposition and saw off a late challenge from Zarias to win the feature pace of the night by a neck.

Simply Sam went into the race in good form, having won his previous two races, and trainer Ray Green was pleased to see him add another victory to his tally in his first standing start test.

“He has been very consistent. He has put in some pretty good runs in his last five or six starts. I think he is a classy horse,” Green said.

“We are pretty happy with how he pulled it off, it was really good.” 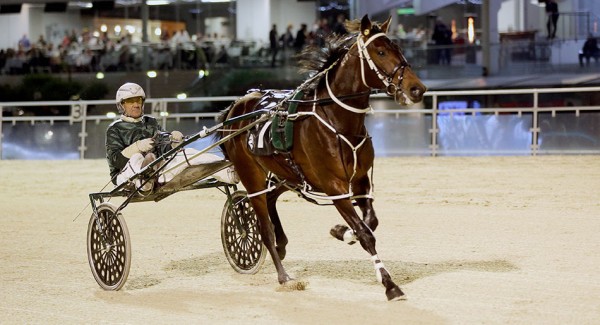 Green said Simply Sam might now be saved for feature three-year-old races later in the season.

“There is not going to be too much here for him soon, he is going to get big handicaps,” he said.

“We are looking at the three-year-old races further down the track so we will be aiming for those.”

Green was also pleased with the third-placed run of stablemate Riverman Sam.

“He is a very nice horse,” Green said. “He is very honest and is a tradesman-like horse. He won’t miss many cheques.”

The win completed a double for Green, who tasted victory earlier on the card with Argyle in the Dawson Harford Mobile Pace (1700m).

It was also the third win on-end for the son of Bettor’s Delight who was purchased by Lincoln Farms out of Woodlands Stud’s 2020 New Zealand Bloodstock Standardbred Yearling Sale draft for $210,000.

“It was a very popular win with the owners because he was an expensive buy as a yearling. It was good to see him put three in a row together,” Green said.

“It was particularly good from him tonight. It suited him as he likes to roll along a bit, he is not one of those sit and sprinters.

“He got to the front in his last three starts and he has been too good in that class. I don’t know how he will handle the next step up but we will see.”