Southerners claim both features at Addington

Southlanders cleaned up at Addington on Thursday night taking out both the feature pace and trot with impressive performances.

Both wins were produced with scintillating finishes from off the pace, with Tweedledee trotting to victory in race 4 and Hazer flying late for his pacing win in race 7.

Tweedledee bounced back to his best form when scorching home from last to win for trainer Lyndon Bond and driver Carter Dalgety. 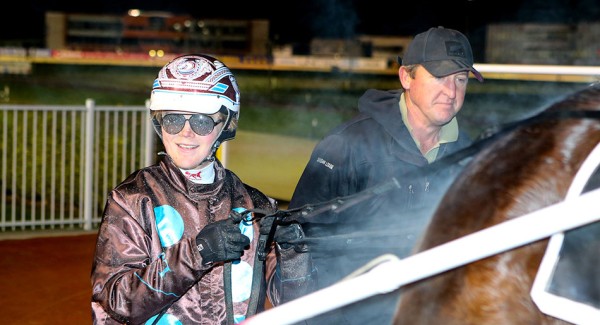 The trainer and driver had hoped to combine earlier this season but it didn’t work out.

They more than made up for it with Tweedledee’s victory.

“When I needed a junior claimer, I had already asked Carter for a drive down south but he was double booked and couldn’t get a connecting flight from Auckland,” Bond said.

“I said I would keep you in mind and I did.”

“It was a beautiful drive, he is a good young kid.”

Bond has had Tweedledee stationed in Canterbury during the winter with Jamie Gameson.

After a gallop last week, the pair devised a plan to get the trotter back to his best on Thursday night.

“It was good to see him get one, that was the whole idea of sending him up there,” Bond said.

“He stayed at Jamie’s and he does a great job.”

“They have gone pretty hard early and that has played into his hands.”

“Jamie put the spreaders on last week and I don’t think he liked him that much.”

“We took them off and he was back to his normal self.”

“He can be devastating if he can get that one run.”

Tweedledee will now have a short spell and be set for New Zealand Cup week.

“He is going to get a wee freshen up and get ready for Cup Week.”

Tweedledee is raced by Bond’s father, Jimmy, the former Southland trainer and driver.

Bond senior is no stranger to sending a horse north to win at Addington, having scored with Young Al all the way back in 1974.

Bond then returned the favour after Hazer took out race 7.

The pacer has transferred to the stable of Ken Ford and Amanda Tomlinson who had him primed to beat a field higher assessed pacers.

Hazer was held up with nowhere to go with 125m to run before driver Sheree Tomlinson found room along the inner for the horse to let down with his winning run.

Hazer is raced by the Nickels For Pickles Syndicate made up by Gerken and his family.