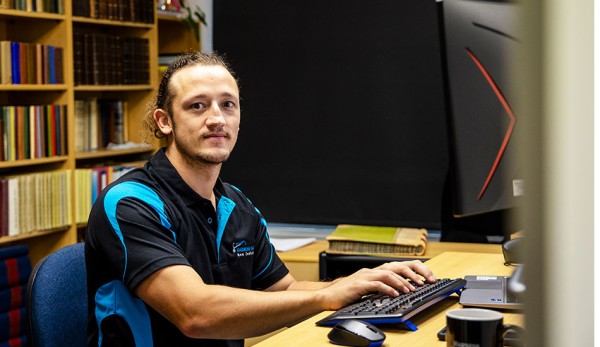 The 28-year-old started working for HRNZ this year as its first ever Data Analyst. It's a new role designed to provide detailed insight into all aspects of the sport, and specifically investigate what's working well, and what's underperforming, and why.

"I'm loving it," Partridge says, "harness racing is a new industry for me and I’m working much closer with IT than I’m used to, so great for my development and just getting amongst it really."

Not from a racing family but with more than a passing knowledge of harness racing, Partridge graduated with a double major in Maths and Statistics from the University of Auckland before completing a Masters of Applied Data Science at Canterbury.

"I've always enjoyed maths - I guess I'm a numbers person rather than a creative type."

He's also a keen sportsman - "surfing, golf, tennis whatever - and the gym".

Since his studies he's worked at Stats NZ - "I was part of the Census team" - and before that, was employed by Tourism Holdings Limited, the country's largest provider of holiday campervans.

"They rent campers like Britz, Maui and Mighty and my role as a modelling analyst was to help produce weekly RV prices as part of the revenue management team..... it's all about pricing algorithms."

Put simply the job was about supply and demand - the more people who want campervans the higher the price.

"It's similar to the way hotels and airlines operate," says Partridge.

His new role is also far from straight forward.

"The big questions are around turnover and GBR (Gross Betting Revenue) - my job is to drill down and see how we can maximise GBR, which is one of our main measures."

He wants to work out which meetings are successful and why, and how those principles can be applied to bolster meetings and/or venues that are struggling.

The goal is to produce a dashboard that will feature a collection of reports that will provide detail to the industry that hasn't been available to date.

"We think only good things can come out of this," says HRNZ Chief Executive Gary Woodham, "we decided that we need some fresh eyes on what we are doing and we are really looking forward to seeing what Ollie comes up with."

Partridge knows there are no quick fixes but he's up for the challenge.

"I've been the small cog in large operations before, but this role is very different – it's a great opportunity."