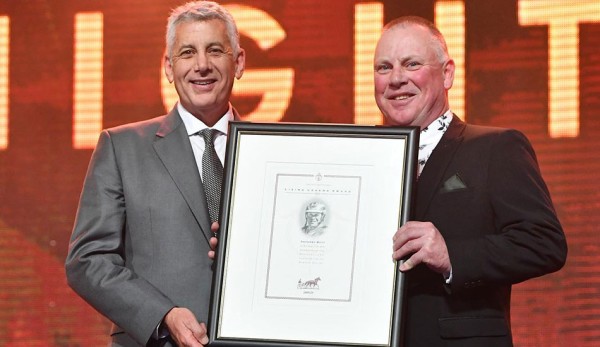 The former Kiwi was surrounded by family and friends at a glittering event at Melbourne’s Crown Casino as he accepted the award.

Butt was an outstanding junior driver in NZ, became one of the country’s top drivers and, propelled by Blossom Lady, quickly made his mark in Australia’s major races.

As well as winning the 1992 New Zealand Cup Blossom Lady gave him the first two of his record seven Hunter Cup wins.

It's fitting he received the award in Victoria, which is now Butt's home with partner Sonya Smith.

The other marquee award for the night, the Gordon Rothacker Medal, went to another “Living Legend” in Brian Gath.

Just a few months ago, Gath became the oldest driver to compete in an Inter Dominion final when he drove in the Sydney trotting final.

The 77-year-old is regarded as one of the greatest drivers the sport has seen in this part of the world with more than 3600 winners, including the 1978 Inter Dominion final on his own pacer, Markovina.