Kiss The Girls gets Cup win

The five-year-old gelding had to be pulled up in the Listed NZ Country Championship Final (3200m) last month after sustaining a punctured tyre.

“We are absolutely rapt. We have had a bit of bad luck recently and it was really nice to get a lovely win today,” Jones said.

“It is not very often that you get a horse that starts in a $100,000 race and to have that happen (flat tyre) was a bit soul destroying, but he bounced back well today.

“I was reasonably confident, I thought he would go a good race.” 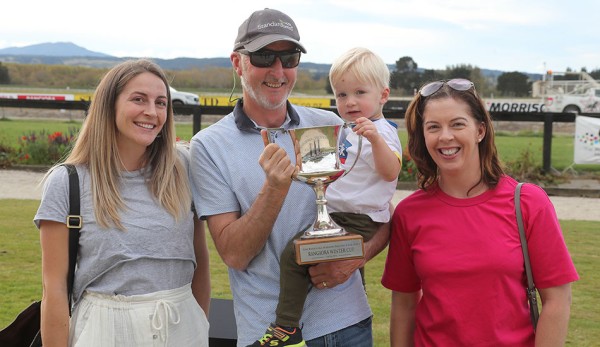 Jones is now weighing up whether to send the son of Terror To Love for a spell or head to the Listed Betavet Uncut Gems (1980m) at Addington Raceway on Friday.

“He has got the Uncut Gems, but that is a short course 1950m, which really doesn’t suit him,” Jones said.

“But it is for a good stake so we may have a go, but my heart is telling me to put him out and give him a wee break.”

Jones will still have a runner at the meeting, with the Prebbleton horseman set to contest the Listed NZB Standardbred Uncut Gems Trotters Classic (2600m) with Majestic Lavros.

The seven-year-old gelding was runner-up behind Matua Tana over 2600m at Addington Raceway on Friday, pleasing Jones after he suffered a mild case of the thumps in the Listed Sires’ Stakes Aged Trotters Classic (2600m) last start.

“We have had him for a couple of months,” Jones said. “He ran third first-up and the next start he got a thing called the thumps, it is a bit like having massive hiccups. He went awful and he was quite distressed after the race.

“We treated him for that, and he came out on Friday night and went super.

“He will go to the Uncut Gems. He is a nice horse and he will be hard to beat.”

“We sold our property and asked if we could have our horses at his place, which he very nicely agreed to,” Jones said.

Majestic Lavros was previously trained by Mark Jones, but Kotzikas felt it would be a good change to have him trained on his property by Derek Jones and utilise his farrier skills.

“He wanted to keep him closer to home and he has got a bad foot, he gets quarter cracks. I shoe him because I am a farrier,” Jones said.

“Having the pool at Kypros’ is also a big plus for us.”