McKay’s faith in trotter pays off 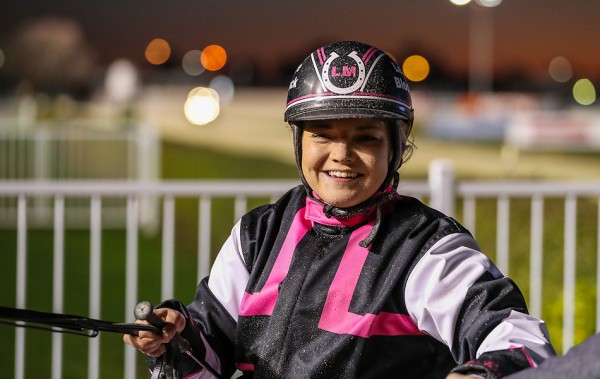 Six-year-old trotter Faith No More would live up to her name with many trainers, but not Laura McKay.

The daughter of Majestic Son has proven to be a headache for McKay and her previous trainer Michael Cations, but McKay has kept her patience with the mare and it is starting to pay off.

Faith No More recorded her second victory from 34 starts when taking out the Dunstan Horsefeeds Mobile Trot (1980m) at Addington on Friday night, almost a year since her maiden win for McKay.

She has since had two placings from 21 starts, but McKay kept her faith in her trotter, and she was delighted to see her breakthrough for another win.

“I was really happy with her,” McKay said.

“I thought last week she was a bit disappointing in the wet. I wasn’t really sure how she was going to go tonight but I thought I would just drive her accordingly to how she feels, and she felt super.

“A few of them galloped, which helped her, but in saying that some of them did gallop in front of her so she had every opportunity to gallop herself, which she may have done in the past, but her manners have been near perfect this time in.

“She is starting to work it out now and seems to be coming to it.”

Faith No More came into McKay’s care after lockdown last year and she brought up her first training win after four starts.

McKay first became aware of Faith No More courtesy of Justine Le Lievre and she said she was immediately taken by her when she went for a trial drive.

“I was looking for a horse to train on my own,” she said. “My mum’s partner, Justin Le Lievre, found her and said to me that he found a trotter that I could buy.

“Mike Cations had her at the time and he always rated her and said she was good enough to win a couple of races, but her manners were letting her down. She would gallop for no reason.

“I went out and drove her and I loved her straight away, so I bought her.

“She won this time last year, so it has been a while between wins. It has been a lot of time and patience, and just trying different things and what works for her.”

Doing the steering on Friday night, McKay brought up her first win as an open driver, but she was more thrilled about adding another training victory to her tally.

“That was my first win as an open driver and it was great to get another training win on the board,” she said.

McKay is enjoying working her small team that she works in with employer Steve Dolan’s horses at Russley.

“She is my only racehorse, but I have got a yearling that I bred by Peak, and I have just done a second prep with him and he has gone out for a spell,” McKay said.

“I have also got another one coming in a couple of weeks. A two-year-old trotter from Martin Denton.

“I help out Steve Dolan who trains at Russley. He works a small team and I work my ones in with his, so it works out quite well.”