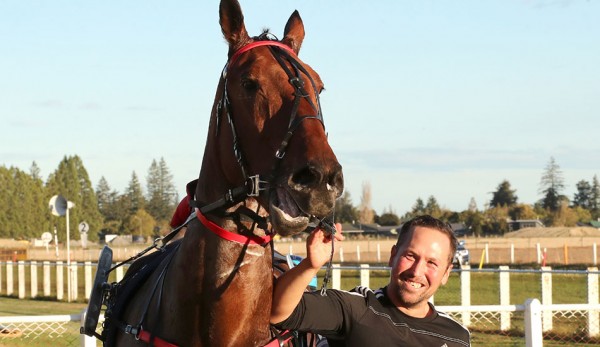 The progeny of Auckland Reactor have their critics, but not Joseph Gray. He thinks they’re just great. He's won with two of them, and has hopes of getting more with a third.

A hobby trainer at West Melton over the last five years, after starting out as a junior driver when he won 23 races between 2004-07, Gray has a breakout 2021, winning four races, with two Auckland Reactor geldings. He now has career statistics of four wins from 68 races, dating back to 2017.

King Arthur and Key Reactor have earned around $32,000 for Gray and his racing partner David O’Neill since being acquired for a collective $2000.

King Arthur was initially tried on lease by Ken Dixon and had four races for him as a three-year-old and three as a four-year-old.

He was fourth on debut at Motukarara, but he was in a gap and it was all downhill from there, with an 11th being his next best effort.

King Arthur was bred by Paul Yesberg and the first crop son of Auckland Reactor was run through the 2016 Premier Sale, where he didn’t even get a bid, no doubt because he was so big even then.

He’d been back with Trent Yesberg for quite some time before Gray bought him for $800.

King Arthur began racing for Gray last winter and recorded six seconds and a few other placings before he ran into trouble at Motukarara in early April.

He copped a check early at the crossing and later locked wheels with Dalness First and Ben Hope when attempting to improve coming to the home turn.

“His legs got cut up pretty badly in that incident and later when I had Tommy Behrns go over him, he said his hip was out and he needed to be spelled,” said Gray.

“It’s since coming back from that that he’s been going super and seems so much stronger.

“Tommy checked him over again last week and said he was perfect, so I thought he was a good thing on Sunday.”

Gray had been driving King Arthur right through and was fourth with him when King Arthur resumed at Addington on July 25.

That day they did a prolonged early burn to wrest the lead off Adhara and Ashleigh Stewart and while they were gone a long way out, King Arthur boxed on bravely from three fence in a R40-46 that went in 3.15.

Gray then sort of sacked himself, putting on Matty Williamson due to his confidence that he would win.

That he did in no uncertain terms – King Arthur led on his ear and with no challenges Williamson was able to rate him home with even 28.5 quarters to cruise in by three lengths.

It was King Arthur who put Gray into Key Reactor, also a first crop son of Auckland Reactor bred by Paul Yesberg.

Key Reactor was also 17 hands as a yearling and his pedigree wasn’t up to much at the time either, although his dam Lady Davinci would next produce Dadndave to Bettor’s Delight.

“He wasn’t a sales type yearling and when I tried him, he was so big and gangly that I couldn’t get any condition on him and get the work into him,” said Yesberg.

“He would work like a horse that could win a race or two pretty quickly, but he needed a lot more time, and Joe has been able to do that.”

A year would pass between Yesberg starting Key Reactor and Gray racing him last winter, and it would probably be fair to assume a lot of feed was piled into him.

“The first time I took King Arthur to the trials he won at the Methven workouts (November, 2019) rather well and I thought ‘these Auckland Reactors might be alright’.

“I knew Trent had another one he wanted to quit so I bought Key Reactor for $1200.”

Things didn’t go quite so smoothly with him last year however despite an encouraging second-up third at Addington at long odds.

“I think it was his third start for me that he got knocked over and he went right off the boil.

“I gave him a brief let up, but when he came back he was no better so out he went again for longer.

“It was when he came back late last year that he began going super on the grass tracks, after we’d figured out he was best saved for one run at them.”

Key Reactor’s first show of form in a while was at the Rangiora meeting just before Christmas when third for Jessica Young-Grant, and then he won for her at Motukarara just after Christmas to give Gray his first training success.

He won there again in March for Olivia Thornley, getting a free win in a race for junior drivers where he paid $33, and the pair scored again two starts later over a mile at Methven where they won going away by a length and a half after coming from the four back in the running line on the home turn.

Key Reactor was then spelled and he’s now being prepared for the grass track racing in the spring.

Now what remains to be seen is whether Gray can work the same oracle with the third member of the team, It’s A Shawthing, yet another six-year-old gelding by Auckland Reactor.

Although this one was bred by Alabar and sold as a weanling at the Mixed Sale at Karaka for $7000.

He was looking promising at the start when he qualified as an early three-year-old for Andrew Stuart and won several trials before finishing second on debut at Addington.

But it would be all downhill from there and two years later, or last winter, Stuart had had enough.

Gray hasn’t fared much better so far outside of It’s A Shawthing bolting away with a trial at Motukarara in May where he came a last quarter in 27 to beat Go Kiwi and Saginaw.

“He’s got a massive engine but he doesn’t try and he can also do things wrong.

“He went super in that trial and then he went awful in a race.”

It’s A Shawthing is likewise back jogging preparing for the grass track racing and might be one to throw in the Black Book, given what has gone before.

Gray has been having a crack since buying Stephen Hale’s old place a couple of years ago after previously being in Hororata.

“It was hopeless trying to train horses at the Hororata track because it’s in a dreadful state with everything else that goes on there.”

He has been working full-time for Andrew Garters for going on 20 years and then he and O’Neill do their own, after the latter gets home from his job at Couplands.

Gray didn’t come from a harness racing family although his father Kuru went to school with Hamish Hunter and Alex Milne and would take Joseph to the races as a kid.

Gray went and worked for Milne after leaving school and would have stints in the stables of Jeff Whittaker, Ivan Court, Paul Nairn, Phil Burrows, Greg Payne, Greg Hope, Ken Barron and Nigel McGrath in no particular order.

Ivan Court provided for his first win as a junior when Falcon X R won at long odds at Methven in December, 2003, and he also won with the likes of Ewie Duncan (Barron), Day Of Reckoning, Shirley Temple (Nairn) and Keeprightondreaming (Garters).

Gray has driven just the one winner as an open driver – Dreamy Damien at Addington two years ago for Garters from a handful of drives with him around the time.

“Outside of King Arthur, whose such a lovely and easy horse to drive, I hardly drive at all these days.”

Gray stopped driving altogether after a bad smash at Addington in August, 2007.

He was angling away from three fence on the home turn with Lady Bess when another horse took her legs and down they went, with a trailing horse hitting Gray hard.

“I drove for a while after that but it affected my confidence and enjoyment and I flagged it altogether for about eight years.”

But Gray is back now winning races as an owner-trainer and King Arthur and Key Reactor, and perhaps It’s A Shawthing, are far from finished yet.