I am pleased to report that through Racing New Zealand a three year distribution agreement has been reached with the other codes that sees forecasted an additional $3.1 million due to harness for the 2021/2022 racing season.

As a result, the Board of HRNZ last week approved the funding policy to clubs for next season. To enable clubs to complete their budgets for next season, they will have received communication on their funding. The great news is that clubs will see an improvement in stakes funding at the lower levels. In addition, group and feature races including country cups will be funded at 100% of their minimum level. Clubs will be expected to pay out 100% of the stakes provided across their season of racing, details of this are included in the club funding agreements. Clubs will have the ability to enhance stakes further through sponsorship and other locally generated revenue.

What became very clear in reaching agreement on the distribution of the TAB profit is the gradual decline that our sport has been in for some years now, and just how poorly we as a code do in relation to profit on export compared to the other codes.

In terms of the commission on export (off shore betting), which is paid out at 3% of the actual, up to the end of June, Thoroughbreds have received $4.6m, Greyhounds $4.5m and Harness $1.3m. It is clear that we have work to do in this area and the Board is working with an offshore partner to increase our exposure in Australia.

To improve the performance of harness, the Board of HRNZ are pursuing a number of strategies that will require participants to think and act for the greater good of their sport as opposed to solely their patch.

Work is happening in the background to reset our racing programme to maximize the return to our sport and to build on our social relevance and appeal. Thank you to all involved in this consultative process. The detail of the new programming will be launched at this year’s annual meeting in October.

As of last week, Harness, along with the other codes, is back on the airwaves thanks to SENZ radio who have taken over the TAB radio frequencies. The promotion of our sport comes at a price and this along with other promotional partnerships is a direct cost against our share of the distribution.

Last year I told the industry that we would be a consultative Board and we have been listening. The HRNZ Board has been looking at ways that owners can be encouraged to race their horses in New Zealand, at an increased rate and for a longer number of years.

To this end, the following changes have been made:

Key Performance Indicators
Below are the performance indicators as at 11 July 2021. 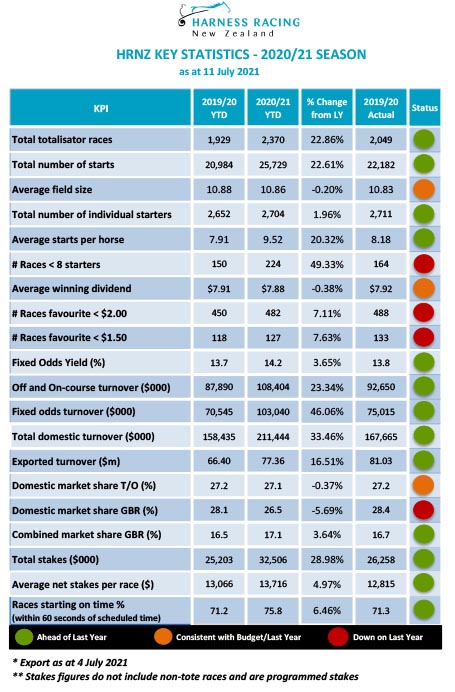