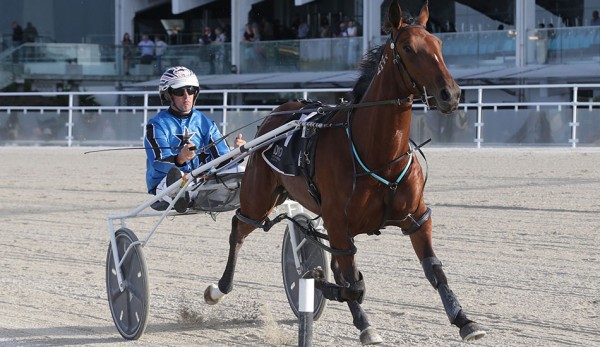 Commander Cathy gets a late-season shot at revenge over Bettor Twist at Alexandra Park tomorrow night.

Not that Bettor Twist, Australasia’s best pacing filly, will actually be there to do anything about it.

The final meeting of the season says the two three-year-old fillies topping the table for the NISBA Alexandra Park filly or mare of the year, with Bettor Twist on 36 points and Commander Cathy on 33.

With the points scale being five for a win, three for second and one for third, if Commander Cathy wins race eight tomorrow night she will be the new Queen of the Park, on paper anyway, while the title would be shared if Commander Cathy finishes second.

Winning the title would give her some slight consolation for the one and only time the pair have met, at the Jewels where Commander Cathy was a brave seventh as Bettor Twist recorded one of the winning performances of the season.

While Bettor Twist’s place at the head of the Alex Park female title has come through group races, Commander Cathy sits second through sheer consistency.

Remarkably, she has raced 19 times in her debut season which started almost exactly a year ago on August 6 for four wins, seven seconds and a third for almost $50,000 in stakes and has a shot at a $30,000 Futurity Final tomorrow.

If she can overcome the outside barrier to win that she will increase her future broodmare value, being a daughter of Captaintreacherous out of Gold Elite, a sister to Gold Ace.

Regardless of whether she does enough to earn the title tomorrow night, Commander Cathy has emerged as a filly worth targeting serious black type in the better mare’s races next season.

The elite mare of Alexandra Park title isn’t the only one set to be decided tomorrow night as two of the three premierships are also still up for grabs.

Zachary Butcher leads Tony Herlihy by one (41-40) for the driver of the year while the junior driver title sees Andrew Drake and Alicia Harrison tied on four wins each, with Harrison having two drives to Drake’s one tomorrow.

The trainers premiership is in safe keeping for Tony Herlihy who will start the meeting on 36 winners for the season at headquarters, seven more than Michelle Wallis and Bernie Hackett with Team Telfer one behind on 28.