A race to race double has continued a good run of success for Canterbury trainer Brendon "Benny" Hill at Phar Lap Raceway.

Yesterday afternoon Mongolian Machete got home at big odds ($24.70) in Race 3, then favourite Frank Burns repeated the dose in the very next race.

As a bonus Mongolian Machete's driver was Hill's son Max. It's the first time the father-son trainer-driver combo has been in the winner's circle.

"It was a good buzz and really good for Max," says Benny Hill.

It was Mongolian Machete's first win in 22 starts and came after a copybook drive. Drawn one the six year old Art Major gelding slotted into the trail behind hot favourite Backburn only to take the passing lane and win by three quarters of a length. 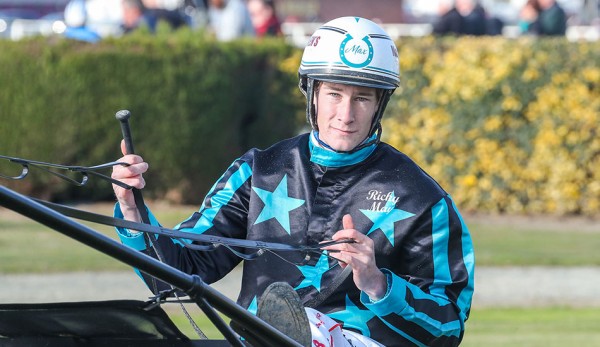 It was Max's eighth career win, his first coming with Watch Me Now when he was working for Tank Ellis and Kirstin Barclay. He's since left Southland and is working for his dad over the winter.

In race 4 it was the old firm of Ricky May and Benny Hill. Frank Burns bobbled at the start, settled midfield and then launched at the 400, producing a sustained run to win by half a length.

"Timaru's been good to me," says Hill, "I had my 200th winner there and was also the top trainer there one season."

The pair go way back through their association with two-time New Zealand Cup winner Monkey King, fellow millionaire Baileys Dream and top racemare and 2011 Horse of the Year Carabella.

Based at Swannanoa in North Canterbury Hill's trained 227 winners since starting out just over 20 years.

Hill wasn't at Timaru to see his two successes. He'd just got back home after a few days in Auckland that involved dropping in at the NZB Standardbred weanling sales at Karaka. Together with Tony Hickman they bought Lot 11, a Downbytheseaside - Victors Delight filly for $23,000.

The quest for winners continues.