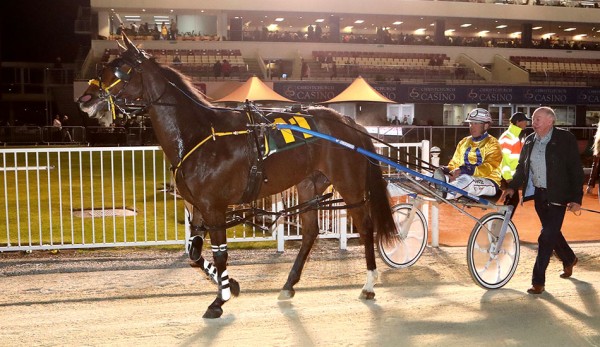 “I think he’ll be right up with Majestic Cruiser and Cruz Bromac before too long,” Grimson said.

“He’s the fastest horse I’ve ever sat behind. It’s incredible what he can run a quarter in.

“He’s thriving on the racing here (Menangle) and getting better all the time.”

Fire Fox made it four wins (and a second) from five runs for Grimson when he brilliantly beat a strong free-for-all field, including the likes of Alta Orlando and Wildwest, at Menangle on Saturday night.

Driver Cam Hart took Fire Fox to the front from gate eight, dictated with a cosy 30.4sec second split, then buzzed home in 54.3 and 26.7sec to win easily from Zeuss Bromac with Alta Orlando third.

Fire Fox won four times in this country before going to Australia in February though he did have another nine seconds in his 26 starts.

Grimson said Fire Fox’s win booked him a trip north with Majestic Cruiser, Cruz Bromac and some of his other stable stars for Queensland Constellations Carnival.

“I’ll head-up in a week or so and Fire Fox will come as well,” he said.

“I’ll probably be there for a couple of months with a team.”

“Cruz Bromac is about ready to go again, he might even run in the Golden Mile at Menangle next Saturday. He’s come back particularly well, better than before Miracle Mile time.

“Majestic Cruiser isn’t too far away, either. Probably a couple weeks away from racing. I’m not sure if he’ll have a run at Menangle first or go straight to Brisbane.”