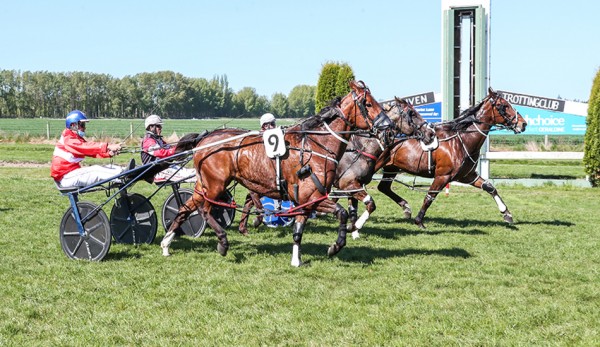 It was the first stakes success for the Brent White-trained gelding, who had previously placed in the Listed PGG Wrightson Standardbred ‘Harness 7000’ Mobile Pace (1980m) and Gr.3 Rangiora Classic (2600m).

The pace was true from the outset, with driver Samantha Ottley taking the early pacemaker role with Plutonium Lady and the field was soon strung out.

The field eventually came together down the front straight, with driver Stephen McNally looping the field to sit parked with Cranbourne.

McNally handed up to northern raider Kango at the 800m mark to finally gain some cover. He found some clear air up the home straight and was able to get the better of his foes to win by a neck over Steel The Show, with a further nose back to Vintage Cheddar in third.

White had marked the race as Cranbourne’s key target of the spring and he was delighted that his plan came off.

“I said to Stephen (McNally) when he hopped in the cart, ‘this is probably our New Zealand Cup today’, so it was great to get the win. It was great for all the owners because they are all from around that area,” White said.

Cranbourne took a winning result into Sunday and White said he had to put in a repeat performance in order to have any hope of heading to the New Zealand Trotting Cup next month.

“He had to put his hand up today,” White said. “It was a truly run race and he fought on very well.

“It was a credit to Stephen, he put him in the race and made a decision to hand up the parked position when he did, and that was probably the winning of the race.

“I thought it was a really even field and the way the track played you had to be very handy.

“I was happy to see Sam Ottley in front instead of one of the Dunn runners, I think that changed the whole complexity of the race.”

White is currently caretaker trainer for Vintage Cheddar and he was pleased to see him run on well for third for good friend Alister Black.

“He came up here last year and got better and better with a bit of racing. Alister was happy with the run and he will keep improving,” White said.

“He will probably go around at Ashburton in the Flying Stakes and then onto the Cup.

“We are good mates so hopefully we both can have a horse in the Cup.”

While the New Zealand Cup remains the ultimate goal for Cranbourne, he will likely head to Addington Raceway a week prior to race at Kaikoura’s transferred meeting.

“One of his targets is the sales race at Kaikoura because I think he will fit into that well and it is worth the same amount of money as the Kaikoura Cup,” White said.

“I know the owners would love to have him in the (New Zealand Trotting) Cup and to have one go around in the Cup is everyone’s dream.”