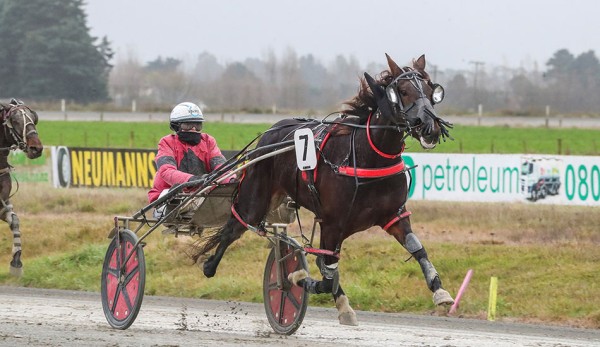 A lack of recent racing doesn’t have trainer Bruce Negus too concerned about Classie Linc’s chances at Addington on Thursday night.

The three-year-old resumes in race 5, having been freshened following back-to-back wins in May.

With a good amount of work under her belt, Negus is expecting a forward showing from the filly who he is tipping to have a very bright future.

“I think she is an outstanding horse and even though she hasn’t had a trial she has done plenty of work.”

“We have some big races for her, the Nevele R, the Sires Stakes and the (NZ) Oaks.”

“If she is going to be competitive in races like that, she would want to finish in the first three in that race on Thursday night.”

Negus gave Classie Linc a break to time the filly’s run into her better targets in the spring.

Though she has drawn a tricky alley in barrier 7, Thursday night’s race looks ideal for her.

“With the big races later on we didn’t want to get through the classes too soon.”

“This race is a good stake, it is not a bad field, but she should get somewhere in that race with a good run.”

“Her work has been really, really good, I think she is pretty ready.”

Both come into the 1980m event on the back of third placings.

Drawing barrier 1 looks a big plus for Alexy for driver Jonny Cox.

“Then the other day he went a really good last half, it was an unexpectedly bold move and if it came off he would have been a hero.”

“But the horse went super.”

“Tane JJ is one that is so up and down.”

“He can go ordinary but with the same run he can run a good race.”

“Everything with him, it just has to be to be right.”

“If he gets a fright somewhere along the line, it will throw him off the game.”

Tomlinson and Negus have formed a strong combination since she took over the position as stable driver.