Can More Gooda live up to her name?

Aged just six at the time, Theo Gardiner (pictured) had a simple request for a horse owned by his dad Dan - he just wanted her to be "more gooda". 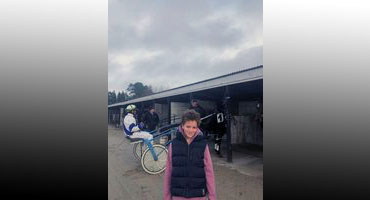 Fast forward four years and that very horse is set to debut at Addington. After two recent placings at the trials at Rangiora, More Gooda will line up in Race 7, the XCM Sport Mobile Pace on Thursday night.

Gardiner's introduction to ownership came about by chance about five years ago. He was invited to a breeders' night at Addington by Hamish Scott, who's synonymous with the "Kiwi" brand of horses including the super talented Kiwi Ingenuity.

Both Gardiner and his wife Melanie Renner work with Scott at HSW Accountants in Christchurch. While Renner has been involved in horse ownership and racing horses, Gardiner has not.

"I won a spot prize, which was a service fee to Highview Tommy... before then I had never had anything to do with breeding."

Trainer Andrew Stuart suggested to him that he had a mare (Major Overdrive) that was available and the deal was done. Stuart now trains the horse who will be driven on Thursday by champion reinsman Blair Orange.

When the filly was born the inevitable question was what would she be called?

"I said to the kids that they could name our horse and put the names into a hat - the only condition was that the name had to sound like a fast horse," says Gardiner.

"And Theo came up with "more gooda" - because that's what he wanted the horse to be."

In the interest of fairness daughter Olivia picked Raven to be the horse's stable name.

On Thursday night the Gardiner family will be on course to see if their filly can live up to her name, including Dan's parents who are heading to the races for the first time.

"She's got a tough draw (outside of the front line over 1980m) but we've been told she could win a race or two in time," says Gardiner, "but we just hope she does everything right."