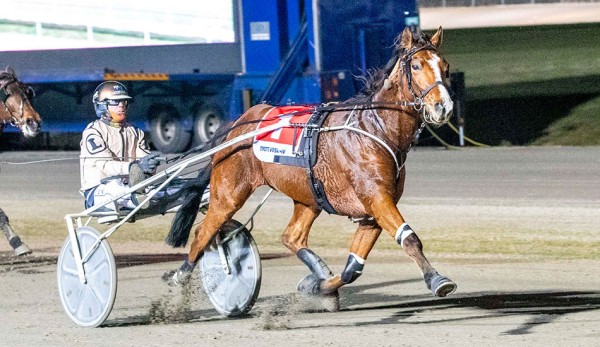 It was love at first sight for Chris Lang and Kiwi-born trotter Ollivici.

Lang remembers the day he first saw Ollivici at the yearlings sales in Christchurch in 2019.

"I wanted him as soon as I saw him," he said. "I really thought he was impossible to fault. He looked great and was out of a terrific family."

So he set about buying the son of Orlando Vici out of the former talented trotting mare Belle Galleon, a winner of 11 races.

More significantly, he is a half-brother to millionaire trotter Stent.

Lang's love for Ollivici only grew when he got him back to Australia and started training him. "Yeah, he just had everything you'd want from day one," he said.

But excitement turned to heartbreak when, as an early two-year-old, Ollivici crashed through a fence and badly injured a hind leg.

"We thought it could be all over. It looked career-threatening. It was devastating at the time," Lang said.

"Thankfully, with some great veterinary work and a lot of time, he's got back to where he is now.

"He missed his two-year-old season and still wasn't completely sound last season, despite the potential he showed last season.

"It's only now, this campaign, he's really come right. Hopefully it's the start of a very exciting chapter."

Ollivici has won both runs back from a spell and is favourite to make the most of gate one and win the Group 2 Winter Trotters' Cup final at Bendigo on Saturday night.

Lang thinks so much of Ollivici he is aiming towards the Inter Dominion in November/December despite the trotter having raced just 13 times (for six wins and three seconds).

Given Lang's trained superstars like Sundons Gift, Skyvalley and National Gallery, you have to respect his decision.

"The Inter Dominion is in our own backyard and I think he could be my next absolute topliner," Lang said.

"He's not the sort of the horse who will dominate races, but be more of an opportunist. That speed he has is amazing."

Lang became disenchanted with the industry and took three years away from it, including a stint working on a golf course, before returning three years ago.

"Would you believe Oliivici was the first horse I bought when I got back into it," he said.

"It's just taken three years to get him to this stage, but that's what happens when you buy yearlings, especially trotters."