Call Me Trouble back in winning form 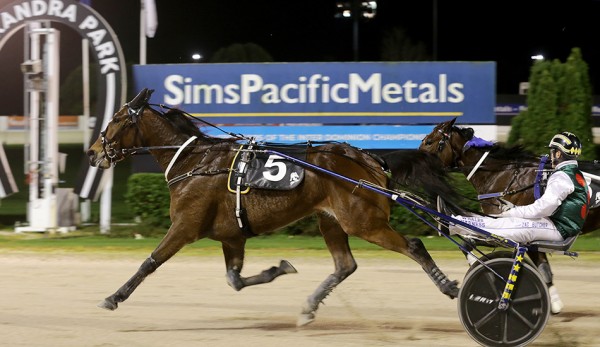 Zachary Butcher may be just starting his training career but he used some old school skills to turn Call Me Trouble’s form right around in the space of six days at Alexandra Park on Thursday night.

And in doing so he gave himself a feature-race double in less than a week with the only two horses in his tiny team actually racing.

Butcher is obviously far better known as one of our elite freelance drivers but is allowed to train three horses from the Lincoln Farms property run by boss Ray Green.

Two of them are Zarias, who won a $20,000 Winter Rewards race at The Park last Friday and Call Me Trouble who was expected to do the same but hung, galloped and generally made a goose of himself last week.

But he was a different, foolproof and happy horse on Thursday and Butcher was stoked with the turnaround, even if it meant taking some ribbing from his mates.

“He hung last week, which he has more or less always done, and galloped a few times and I just got sick of him,” says Butcher.

“So I took him home and put a pole on him and then added heavier trotting shoes to getting him picking his feet up better.

“I figured in this grade we could sacrifice a bit of speed doing that and get away with it and I might only leave them on for three or four starts to get his confidence back up.

“But when horses like Temporale come back he might need that speed back to be able to keep up.”

“I have had people telling me to put it on for a while and when I finally relented this week they told me it was about time.

“But I had a comeback. I told them he had won eight races without it.”

Call Me Trouble could well make his way to the NZ Cup carnival and dip his hoof in group one racing again.

Meanwhile, the stable’s other star Zarias has gone for a spell allowing Butcher to bring two of his other horses back into work.

“I am allowed three horses and kinda have four so I rotate them.”

While Call Me Trouble was the trotting star of the night Chimichurri made it back to back wins in the main pace as he continues to work his way toward the NZ Derby at the end of the season.

“He is getting better and is very strong,” says co-trainer Steve Telfer.

“He will have a few days off now and then there is a race for him on September 23 which is Spring Cup night.

“Then soon after that he will head down south for the Flying Stakes and the Derby.”

The win completed a double for Telfer and his sister Amanda, with their training partnership now five clear of the All Stars on the premiership.