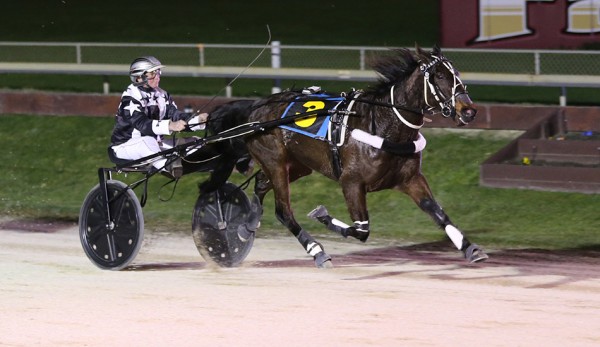 Margo Nyhan and Peter Davis are ruing what would likely have been a quinella in the Spectators Bar Handicap Trot (2600m) at Addington Raceway on Friday night had it not been for an early indiscretion by It’s So Easy.

The daughter of Majestic Son made a flying start from the 10m tape, heading straight to the lead for driver Peter Davis before breaking when heading into the first turn.

After regathering her gait, the Margo Nyhan-trained mare was once again sent to the lead before driver Robbie Holmes sent stablemate Madeleine Stowe forward to assume control of the race.

Madeleine Stowe showed her class upfront, eventually running away to a three-length victory, with It’s So Easy running home well to fight out second place, however, her early indiscretion led to her disqualification from the race.

The lightly-race mare had pleased in her trial earlier in the week but failed to bring those same manners on Friday.

“We took her (It’s So Easy) to the trials on Tuesday and she trotted beautifully, but she didn’t trot quite as well tonight and ended up having an early gallop,” said Davis, partner of trainer Margo Nyhan.

“She is still a work in progress and we would have gone close to getting the quinella had she trotted properly.

“She is very inexperienced and when she does things right, she has got quite a motor. She just got it wrong early and with 900m to go, when I lost the trail, she was just trotting that bend a bit roughly.

“Hopefully we can rectify that and I think we will have a lot of fun with her. She has got a motor and it is just a matter of learning the ringcraft a wee bit.”

While a little bit frustrated with It’s So Easy, the West Melton couple were pleased to welcome Madeleine Stowe back to her winning ways.

“She did everything right tonight and Robbie drove her great. She was the best placed horse in the field. It was a winnable race for her,” Davis said.

Davis said they would progress on with the pair while they are in form.

“I think the thing with trotters is that when they are in form you should keep going because they can be funny things,” he said.

“There is a fillies and mares race on Hannon Memorial Day for the trotters. If they are both going well, we will aim for that.”