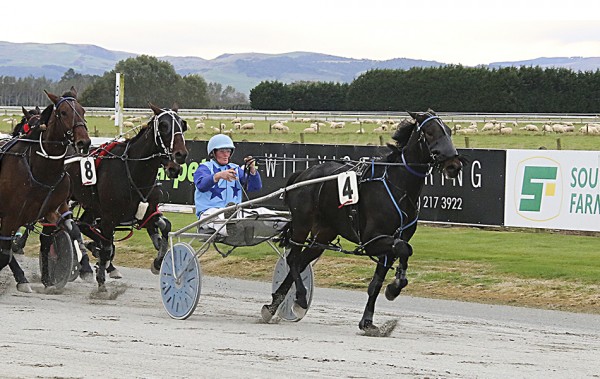 Wrecking Ball revealed little about his epic journey to the winner’s circle when scoring a powerful and deserved victory at Winton on Friday.

The four-year-old backed a huge effort to run second on the same track last week when three-wide and parked for the entirety of his 2400m win in race 3 for trainer-driver Alex Milne.

Wrecking Ball’s last two performances may have racing fans thinking he is a typically relaxed staying type, who quietly and steadily goes about his business.

But it certainly isn’t the case, especially going back in the early stages of his career.

A nervous type by nature, the pacer has tested his trainer’s patience and skill.

And yesterday’s win was a case of months of dedication paying off.

“He has got a unique character and luckily he has behaved himself on race day but he has made it hard on himself,” Milne said

“He didn’t like the mobile at the workouts and I had a hell of a lot of trouble with him.”

“Even now we are still having trouble getting him out onto the track and stopping him from coming off the track.”

Milne has put plenty of time and effort into settling Wrecking Ball and getting him used to the procedures at the races that most horses have don’t have the slightest of issues with.

It’s been a case of working on a formula that keeps the pacer calm and happy.

“I worked out a system on race day and it has worked.”

“We hold on to him at the start, we don’t walk him round and that has worked.”

“Ability-wise he should have won a race long before today but he has just taken a while to do it.”

Wrecking Ball has looked like a grinding type with his tough efforts in his last two starts.

But Milne thinks the pacer has a bit more speed to offer than those runs might suggest.

What his tough recent efforts undoubtedly show is that the pacer should not have too many troubles stepping out of maidens.

The faster tempo of the next grade is exactly what Wrecking Ball needs.

“With a bit more speed on that will be really good for him.”

“He’s actually got a bit of speed and it was good to see him use it today.”

“When I wanted him to go he accelerated nicely and got the job done.”

Wrecking Ball is bred and raced by Matt Maitland of Mokotua, near Invercargill.