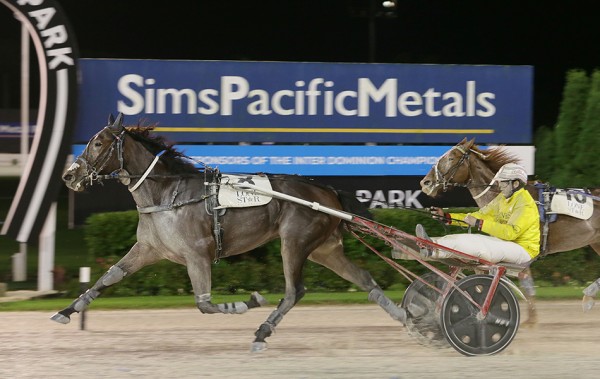 The family assault from the Dunns and Edmonds teams on the Alexandra Park feature trots could hardly have gone better on Friday night.

While Five Wise Men (Craig and Aimee Edmonds) and Sundees Son (Robert Dunn) are officially trained by different stables the reality is Craig Edmonds has been looking after both during this northern campaign as Sundees Son is unofficially trained when in Canterbury by John Dunn, who just so happens to be Edmonds’ son in law.

Dunn also drives the pair and produced two effortless gems to win the group two Sires’ Stakes Champs with Five Wise Men and then the Anzac Cup with Sundees Son.

Sundees Son’s defence, albeit two years apart, of the Anzac Cup surprised nobody as he has been so potent at Alexandra Park before and he looked fitter after his two recent Addington runs.

But what Dunn didn’t expect was a cosy one-one sit till the 500m mark and the chance to launch at full speed around the last bend before clearing out from Bolt For Brilliance, who ran on strongly, and an improving Oscar Bonavena.

“I don’t often get a chance to drive him like that and we were humming going into that last bend,” says Dunn.

“I have never hit a bend going that fast before on a trotter before and he felt super.”

With the step up to 3200m for the Rowe Cup next week he is now clearly the horse too beat with the extra 1000m certain to aid him.

Dunn was even more thrilled with how Five Wise Men handled his Alexandra Park debut and the fact he could drive him with a sit in the one-one in his 2200m mobile.

He looked to be labouring to catch surprise leader Mufasa Metro at the 400m but once he straightened up he was very strong to the line, with Leaf Stride making good ground for second.

“What I really like was how he handled the track,” said Dunn.

“Not only did he have a good first look at the track and not have to hurt himself to win but he trotted really well right-handed and actually felt more relaxed than he did in the Derby down home last start.”

Five Wise Men, who has his owners on track to enjoy the win, will look to make it seven on end in the Northern Trotting Derby this coming Friday and with Alexandra Park now under his belt he is going to start well in the red.