Copy That gets Group One 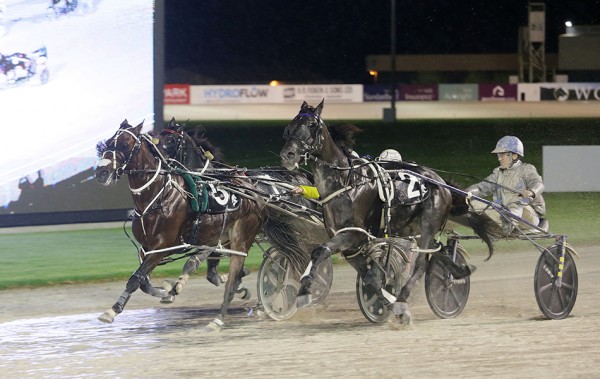 The tough love worked for Copy That in the $95,000 Dawson Harford Taylor Mile at Alexandra Park on Friday night.

And now he has broken his group one duck trainer Ray Green hopes to double down in next Friday’s Messenger Pace.

The hot favourite led for the last 1200m of the four-year-old mile after Steel The Show and Kango went hard early with Copy That three wide and waiting for them to sort themselves out.

But while he could have been expected to waltz home once he did lead it wasn’t quite that easy as Bad To The Bone relentlessly went at Copy That from the 800m, putting a neck on him down the back straight and waking the watch uncomfortable for favourite backers.

Copy That came back under the bigger horse at the top of the straight and held him to the line, the sizzling last corner meaning those back in the field simply couldn’t make ground.

But as good as the winner was, the second horse was the run of the race.

Still, he was coming off a diet of mile racing at Menangle whereas Copy That is still on the way back up after getting a bug six weeks ago.

“We had a few get sick and when he got better I might have been a little too easy on him so the last two weeks we have worked him harder and he has really responded,” says trainer Green.

“It is great to get the group one for the owners but also for the horse because he deserves it.

Green may not have to wait long, with the Messenger next week and the Jewels on June 6 while Copy That could still go to the Rising Sun for three and four-year-olds at Albion Park in July 10.

While owner Merv Butterworth couldn’t be on track to witness Copy That’s first win he listened in to the presentation on the phone of friend Trevor Casey, who received the trophy on his behalf