Winning mare now on the market

How things can change. On Sunday Precious Sara made it career victory number seven at Blenheim. Tomorrow the mare will have a new owner.

North Canterbury trainer Wayne Robertson has decided to sell the daughter of Gotta Go Cullen because of an impending knee replacement which will put him out of action for many weeks.

“I had a hip replacement four years ago,” said the 58 year old who has a five hectare property at Flaxton in North Canterbury, “and now it’s my left knee, it’s bone on bone and I can’t wait to have it done.”

The operation, scheduled for next week, is expected to see Robertson sidelined for a decent stretch.

“I love to play golf and the specialist reckons I won’t be doing that for six to 12 weeks, I have to get the rehab right.” 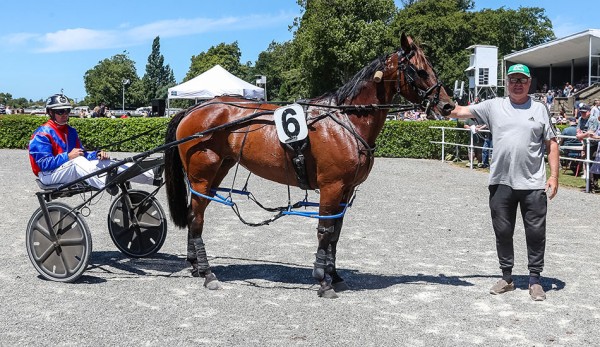 Robertson toyed with the idea of sending Precious Sara to another trainer, but decided against it.

“She’s a nine-year-old so there was no way I could turn her out so it was either sell her or retire her,” says Robertson.

Precious Sara is now part of gavelhouse.com’s latest auction and as of today is at $3,101. The auction closes at 7pm tomorrow night (Wednesday).

While Sunday’s win would seem to be the perfect time to be selling a horse there is also a downside to her latest victory – she is up seven points to a R51.

“She’ll be re-handicapped but she was in a higher grade race at Reefton (December 30) and finished second,” says Robertson, “ if she gets a good draw and a good run she can be competitive in this grade.”

And that’s exactly what happened at Waterlea Raceway on Sunday. Precious Sara led early, then trailed behind Glen Elgin Tomson before zipping up the passing lane to win by half a length.

Robertson co-bred Precious Sara who was trained initially by Greg and Nina Hope. After winning five races she was then served by Always B Miki, producing a filly named after Robertson’s wife - Vicky Maree.

In 2019, after nearly two years away from the track, Precious Sara returned to racing with Robertson taking over her training. Sunday was his second win with the mare, and his sixth overall. Precious Sara has now had seven wins from 83 starts.

Tomorrow she’ll be sold and be moved on, and it will be up to his three-year-old filly to continue the breed.

It’s hoped she’ll be up and going in the next few months. The same could be said for her owner.