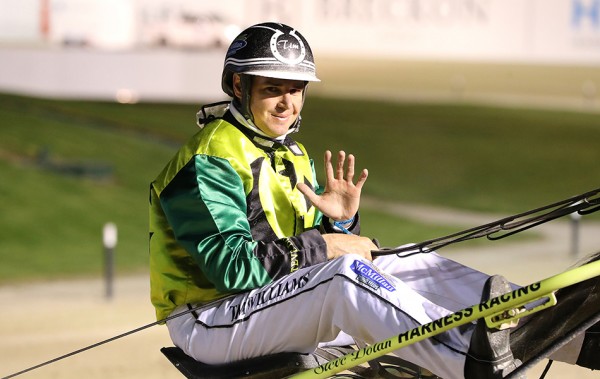 Tim Williams set the tone for a brilliant spring with a driving masterclass that produced five winners at Addington on Friday night.

Of the horses the reinsman steered to victory, few were more impressive than Darling Me who chased down Stylish Memphis to win her first start from Stonewall Stud’s South Island base.

The three-year-old would have had an excuse for defeat when she sat off a sedate speed set up by her main rival, but her brilliant finish meant she didn’t need it.

“She was really good, I wasn’t sure I was going to run Stylish Memphis down, with the sectionals she got through the middle it was a good effort for us to make up that ground,” Williams said.

Just one race later the Stonewall Stud team of Williams and trainers Steve and Amanda Telfer produced Superbass for an impressive victory.

The five-year-old ran out of room in his last start at Addington but there was little chance of that happening when Williams took charge of his race on Friday night.

“Finding the front, he was happy and they tell me when he’s led he hasn’t been beaten.”

“Obviously you can’t lead all the time, but once he found the front – he was Tarzan once he got there.”

Earlier on the Addington card, Williams reunited with Wanna Play With Me who made a winning return to racing in her first start from Regan Todd’s stable.

The trotter produced brilliant form early last season before it tapered off as the country’s biggest three-year-old trotting features came along.

With the feeling Wanna Play With Me gave Williams on Friday night and in her recent trials, the reinsman thinks she is back in the kind of shape she was last spring thanks to her move to Todd’s Woodend Beach stable.

“I think so – when I drove her at the trials the week before Regan asked how did she feel and I said like her old self.”

“Other than taking the half hopples off, the beach has obviously been a big assist for her.”

“Hopefully he is back on track with her.”

Just second up and with improvement still to come, Franco Niven looks set to make an impact in the weeks ahead.

“I think he is in for a good spring, he is in that tricky grade now.”

“He was in it for a long time last season and I think that is going to stand him in good stead.”

“I think he might be a little bit harder to it this year.”

“That was evident in his win, he improved a little bit of his first-up run, they ran good time, and to back that up was a good effort, I thought.”

Williams completed his winning run at Addington on Friday night taking out race 11 with the Steve Dolan trained Arabian Blue.