From a double whammy to a winning double 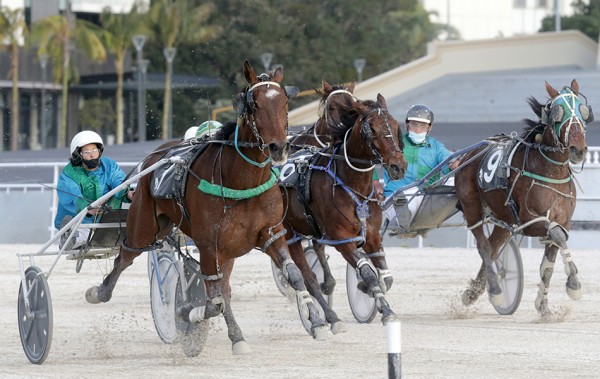 A winning double at Alexandra Park on Friday night proved the perfect tonic for Kumeu horsewoman Sheryl Wigg after a trying few months.

While she has been under lockdown over the past six weeks as a result of COVID-19 restrictions, her main training facility, the Kumeu Trotting Club, was ravaged by flooding late last month.

“We had a double whammy with COVID and then we had the floods,” Wigg said.

“The floods took out the Kumeu training track and that is where we do all of our fast work.

“That has made it very hard for us as I am having to do all the work on my 500m track at home.”

Despite those hinderances, Wigg was able to record a double on Friday night at Alexandra Park’s resuming meeting.

Frankie Jones kicked the meeting off in perfect fashion when winning the Steinlager Pure Mobile Pace (2200m) after doing a fair bit of work in the middle stages to loop the field and take the lead.

“I was always going to come around and take the lead at some point of the race.”

Stablemate Mighty Monica boxed on to finish third in the same race with Wigg saying the lack of fast work took its toll in the concluding stages of the race.

“She came to the end of it a little bit not having that fast work into her. She is actually a better horse than that.”

“I told everybody that would listen that he would win. He has been racing in better fields than that and he has been working superbly,” Wigg said.

Wigg was delighted to be back racing after an extended break, and was particularly animated about reining Frankie Jones to victory after several months on the sideline.

“It felt really good to be back,” she said. “I got suspended for two months, so with the COVID break on top of that I haven’t been out there for over three months.

“Sometimes I get up and think “what am I doing this for?” but when you get a double like that it makes it all worthwhile.”