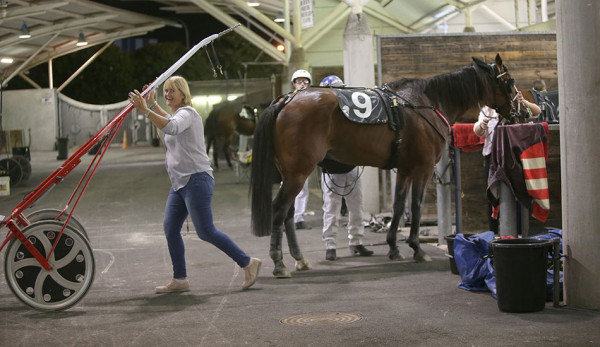 Waiuku trainers Michelle Wallis and Bernie Hackett will have a strong contingent of trotters at Alexandra Park on Friday night, including all but one of the field in the feature trot.

The Zachary Butcher-trained Call Me Trouble will take on the quintet of Wallis-Hackett trotters, led by Group One winner Temporale who will start from behind the 40m tape in the Majestic Son ‘NZ’s Champion Trotting Sire’ Handicap Trot (2700m).

The eight-year-old gelding has won his last three races but Wallis believes he will have his work cut out from the back mark on Friday.

“It won’t be easy for him this week. Zac’s trotter has been going really well and is race fit and it has been a while between races with our guy,” Wallis said.

Stablemate Massive Metro makes his raceday return after nearly 18 months on the sidelines and Wallis said he will need the run despite pleasing in two recent trials.

“It’s been about 18 months since he raced with his injuries, so I am picking he will need a run or two to get back to raceday fitness,” she said.

“He has had two trials and has trialed up nicely, but he will need a few runs.”

It will be a big step-up for Rain Mist And Muscle after beating lesser company last start, but she will have the aid of starting off the front line.

“It is a big step up for her, but it is the grade that she is in, so she has got to race them,” Wallis said.

Rounding out the stables quintet of runners are last start placegetters Kings Landing and Invictus.

“Invictus is in the form of his life at the moment, he is working fantastically, and with the right run he won’t be far away,” Wallis said.

“Kings Landing needs the right run. He always seems to grow a leg on a wet track, so all the rain we are getting up here will help him. He is a consistent horse and he will be thereabouts.”

The stable will line-up nine other runners with Wallis highlighting The Governator as a leading chance in the TAB – No Deposit Fees Trot (2200m).

“He made an uncharacteristic gallop (last start), we took the boring pole off him because we thought he didn’t need it, but that will go back on tomorrow night and he should be hard to beat in that race,” she said.