Thornley on the road again

Sam Thornley capped a big week in the sulky across New Zealand with a winning double at Motukarara on Sunday, and he has another four drives at Wingatui today.

Thornley’s travels took him to two Manawatu meetings, as well as Wyndham and Addington before he drove Paris Prince and Shard’s Fury to victory yesterday. 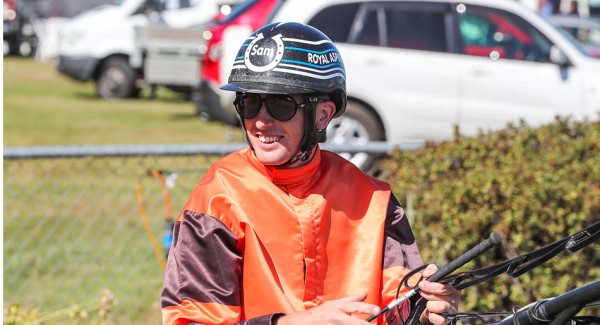 His winning double on Sunday plus his three wins on the Manawatu circuit took the junior reinsman to an impressive five wins for the week.

“It has been bloody awesome – unreal,” Thornley said.

Though the four-year-old has taken a while to make the track, debuting earlier this month, he looks ready to make up for any lost time.

“He should have been racing a couple of years ago, but he has had a few problems and it has taken a while to get him sorted,” Thornley said.

Thornley went on to take out Sunday’s junior driver’s event with Shard Fury who dashed along the inner to win for trainer Bruce Negus.

“That was a big thrill actually.”

“Bruce was quite confident before the race, he thought he would be hard to beat and it worked out real good.”

Thornley’s travel schedule won’t slow down in a hurry, with some good chances to add to his tally at Wingatui.

He takes the reins behind Kadala and Javasa who both look strong each way chances for trainer Darren Keast.

“Kadala should be a good chance, she did a lot of work in her last start and still ran third.”

“Javasa comes into (barrier) 1 now, so she should get a nice run somewhere handy and go a good race too.”

The Negus trained Buffy Northstains produced strong form before missing away at Wyndham over the weekend.

Moving back to racing on grass in race 5 looks crucial to the mare’s chances on Monday.

“I think I pushed her a bit too hard early at Wyndham and she just ran straight out of it.”

“But it was her first start on the grit for a long time and she seems to be better on grass.”

“Back to the grass should suit her.”

“I think they are pretty happy with him, hopefully we can get handy with him and he should be right there.”

Stac was a last start winner on grass at Methven beating Maren Franco who came out and won impressively at Motukarara on Sunday.

Champion horseman Mark Purdon has a very special desire to want to win the main pace at Alexandra Park tonight but fears his superstar pacer Self Assured could spend much of the race chasing.