Dickie has biggest win yet 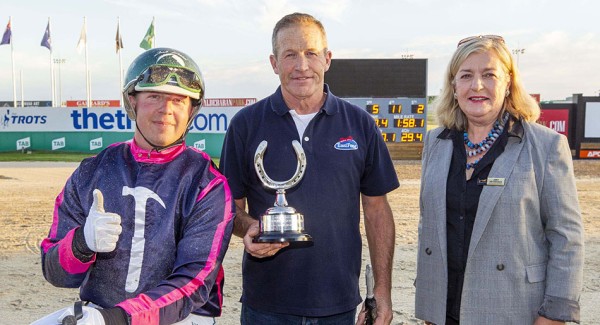 It was a great pick-up drive for trainer David Aiken and Dickie made the most of it by using the sprint lane to win aboard the Andover Hall colt.

Just as important was the fact Dickie is being noticed and drove big guns in both Group 1 finals last night.

Things didn’t go as hoped in the other final, the Home Grown for fillies, when favourite Be My Star looked overawed by an inside back row draw and galloped out of contention at the start for Dickie and trainer Nathan Purdon.

But wins like last night hugely help Dickie build his brand in the tough Victorian market as he also co-trains a team of 10 with partner Sammy Kilgour not far from the Melton track.

The open class trotting feature last night went to veteran Sundons Courage, who has been superbly trained through a long career by Chris Angove. He led throughout in a 1min57sec mile rate for 2240m in the Scotch Notch Memorial.

It has been another big week for leviathan Aussie owner Danny Zavitsanos.

Just days after snaring a spot in the inaugural The Race with his classy speedster Mach Dan, Zavitsanos unearthed brilliant juvenile Petracca to win on debut in a heat of the Bathurst Gold Crown series last Friday night.

There’s so nice symmetry to it with Mach Dan winning his Crown heat in 2019 before finishing third in the final.

Petracca, named after a superstar player AFL team the Melbourne Demons, set tongues wagging with a recent Melton trial and ran right up to it on debut.

Driver Nathan Jack had copped an early check from a wide draw then put the foot down and whizzed around to take the lead.

He dictated terms through the middle stages before ripping home in 27.4sec for a 1min57.8sec mile rate.

Trained by Emma Stewart and Clayton Tonkin, Petracca is by Captaintreacherous out of former classy filly Lovelist. This is her fourth colt, all three so far have been winners, headed by the classy Treachery (seven wins, $174,919).

Our Sunset Delight, one of the most experienced runners in the series, took his record to two wins and two placings from four starts with a runaway win from back in the field.

Shoobees Place colt Better Be The Best also looked sharp putting a 25.3m gap on his nearest rival, albeit in a steady 1min58sec mile rate.

Rickie Alchin’s exciting Huntsville colt Tardelli looms as a major player in the final after a lovely drive from his trainer Rickie Alchin helped him comfortably win his heat in a blistering 1min54.8sec mile rate, set-up when leader Trosa became almost uncontrollable and ran a 57sec flat middle half for driver Amanda Turnbull.

The daughter of Captaintreacherous out of Our Sweet Melody sat just off the pace and blew her rivals away to win by 26.5m.

Another Captaintreacherous filly, Treasure Stride, led and just zipped home a slick 27.6sec last quarter to win her heat by a big space and in a 1min57.4sec mile rate for trainer Russell Jack with his son Nathan in the sulky.

The Bathurst finals are next Saturday night.

Ladies In Red will be back racing sooner than expected.

The now four-year-old mare was originally slated for a long spell and a mid-year return, but she thrived during the break and is back aiming at the $215,000 Group 1 Australian Gold final at Menangle on May 7.

“She’s been back with Emma and Clayton for about six weeks. She won’t be far off a trial with the Gold heats at Ballarat on April 27,” owner-breeder Bill Anderson said.

Anderson said Nathan Jack was front-runner to replace the suspended David Moran as driver when Ladies In Red returns.

The news isn’t as positive with another of Bill and Anne Anderson’s stars, Honolua Bay.

The brilliant five-year-old missed the recent Carnival of a Miracles with a quarter crack.

“You can’t rush these things. He won’t be ready for Queensland, so we’ll aim towards the Victoria Cup (October),” Bill Anderson said.

Honolua Bay has won 14 of his 21 starts and has not raced since brilliantly winning the Group 1 Vicbred 4YO final on New Year’s Eve.

One of the grand old warhorses of Aussie harness Our Uncle Sam has run his last race.

Trainer Chris Frisby confirmed the gelding’s retirement during the big Bathurst Gold Carnival, which is where Our Uncle Sam started his career.

It was a three-month period in late 2018 and early 2019 where Our Uncle Sam put his name up in lights without even winning. He finished second to Tiger Tara in both the Melbourne Inter Dominion in December, 2018 and Hunter Cup in February, 2019.

And the Dan Costello-trained 10-year-old moved very close to topping the $1 million in career earnings.

The win broke a 20-race losing streak for Vultan Tin with his last victory being almost a year ago in the Narrogin Cup on March 20, 2021.

The 2020 WA Cup winner sat behind and stalked hot favourite Papinik, who ran some slick splits in front, and came off his back to snatch a nose win in a flying 1min54.3sec mile rate.

Driven superbly by Blake Fitzpatrick, the Peter Hanson-trained five-year-old beat Alpine Stride by a half-head in a slick 1min54.3sec mile rate for 2300m.

But it was another former Kiwi who turned most heads on the night when Fire Fox blazed a 1min49.6sec mile on debut for trainer Jason Grimson on his way to a 22m in a heat of the Autumn Gift series.

Meanwhile, Team McCarthy had another big night with a treble from Mighty Looee, Artillery and Kingmaker.

Yole took right-year-old Gotta Good Reason to the front from the stand and just kept running, while classy mainland raiders had to chase hard and found it beyond them.

Kiwi-bred Hiranya (Bettors Delight-Holme Fire) won the Tasmania Derby for father/daughter Craig and Abbey Turnbull, while the Oaks went to another Victorian raider, Relentless Me, for trainer Brittany O’Brien and driver Alex Ashwood.