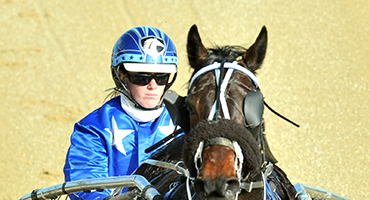 Junior driver Olivia Thornley is keeping a cool head as her drive in one of the country’s richest age-group races of the season looms.

The twenty-year-old has been entrusted with the drive behind Aladdin, a genuine contender in the inaugural running of the listed $200,000 Harness Million Two-Year-Old Colts And Geldings Final at Alexandra Park on Friday night.

Thornley took the drive behind Aladdin when he caught the eye when flashing home for fifth placing behind American Dealer in last week’s Group 1 Sires Stakes Final at the same track.

With even more cash on the line this week, trainer Mark Purdon is more than happy having the rookie reinswoman in the sulky behind his pacer.

“Olivia has really stepped up for us over the last six months and she is worthy of the opportunity.”

Thornley is naturally thrilled to get the opportunity to drive Aladdin in two on the country’s biggest age group races in the space of a week.

The reinswoman said her Sires Stakes Final outing has eased her nerves leading in to the Harness Million.

“I probably got rid of the nerves last week because that was a group 1, so now I am focussing on the race.”

Aladdin was second last on the home turn before unleashing a powerful finish in last week’s race.

Thornley admitted she did not think her pacer would flash home quite as well as he did.

“When we were turning for home I thought we could run in the top six, but I didn’t expect him to finish off the way he did.”
Aladdin has not drawn ideally again this week, but is slightly better off in the Harness Million with barrier 2 on the second row.

“As long as we get a little bit of luck we should get a good run and hopefully we should be there abouts at the finish,” Thornley said.

Thornley drives Aladdin with the support of Purdon and Rasmussen, as well as the horse’s owner Jean Feiss.

The prominent owner has backed the reinswoman in the past by giving her the drive on her former classy racemare, Elle Mac.

Repaying that faith would make victory in the Harness Million a extra special, Thornley said.

“It would be a huge thrill, especially to do it for Jean, she has been such a great supporter of mine throughout my All Stars career.”

“To get a win like that for Mark and Nat would be great, too.”

Aladdin disappointed in his first look at Alexandra Park in Krug’s win in the last heat of the Sires Stakes Series.

But now that the horse has a better feel for the track Purdon can not see why the pacer will not go a big race in Friday night’s history making race.

“I think his first up run helped him a bit – it sometimes does going the Auckland way for the first time,” the trainer said.

“His run last week showed more of the ability I thought he had.”

“He is going to be handy in the run given the horse he follows out [B D Joe].”

“With a better run than he got last week you would think he could feature in the finish.”

Aladdin opened the equal fourth favourite for the Harness Million Two-Year-Old Colts And Geldings with his stablemate Bettor Call Me at $34 odds.