Princess Tiffany out of Spring Cup 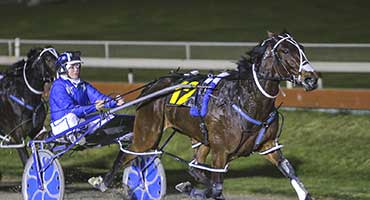 For the third time in just a few days one of the country’s pacing elite has been surprisingly scratched from a major race but in the case of Princess Tiffany there is nothing to worry about.

And punters can feel just as relaxed about New Zealand Cup big guns Self Assured and Spankem after they started the race-missing trend.

Princess Tiffany was in the field to take on Copy That and the northern stars in the Spring Cup at Alexandra Park on Friday night but a longer than expected float trip north will see her miss the race.

“She took a day longer to get up there than we hoped and she missed some work,” said trainer Mark Purdon.

“She is totally fine but you can’t go into those sort of races after missing a hoppled run so I’d rather be cautious.”

The start was to have been Princess Tiffany’s last in New Zealand for a while as she flies out to Victoria next week to be aimed at the mares Triple Crown there culminating in the Queen of the Pacific at Melton.

Stablemate Another Masterpiece will be on the same plane to Victoria next week but he will start in the Spring Cup on Friday, a race which is shaping as the toughest test of Copy That’s season so far.

The four-year-old has been spectacular this campaign and is now the $2.50 favourite for the New Zealand Cup and while he has beaten most of those be meets this Friday all season he has drawn barrier nine this week, coming into the outside of the front line.

That means possibly giving many of the open class stars he has been getting starts from an advantage which, along with the possibility of traffic concerns, means the 2200m standing start may be anything but the walk in the park Copy That’s form would suggest.

His place at the head of the New Zealand Cup market comes not only because of his supersonic form but after setbacks to long-time Cup favourite Self Assured and to a lesser extent last season’s runner-up Spankem.

Both were supposed to start in the Hannon Memorial at Oamaru on Sunday yet missed the race after having sore hooves from working on a track which has got unseasonably hard at the All Stars’s property.

That comes on top of Self Assured galloping so badly at his last start he tailed off and has been put on the unruly, which means he will in all likelihood be giving Copy That, and everybody else, a start in the $540,000 Cup at Addington on November 10.

Future punters are a jittery bunch and the fact Self Assured and Spankem were scratched will have tongues wagging as there is nothing punters like more than a good rumour.

But any long-term concerns about the pair should be allayed by the fact they are both in at the Rangiora trials today.

“They have had some farrier work done and are good to go so they can trial here and then race at Addington next week,” says Purdon.

“So this won’t affect their NZ Cup build-up at all, not this far out from the race.”

While hot favourite Krug had his coloured lowered by American Dealer in the Sires’ Stakes Final last Friday he will still be be red hot to win this week’s 2200m return match after drawing the ace, with American Dealer on the second line and the horse probably rated the only other winning chance It’s All About Faith drawn barrier five.

The meeting also see exciting four-year-old trotter Bolt For Brilliance taking on former stablemate Temporale in the main trot in the greatest test of his career so far after being quite stunning winning last Friday.