Today we start a two-part series on all the first season sires at the NZB Standardbred Yearling sales at Karaka and Christchurch (Feb 13-16).

In the first HRNZ Breeding Manager Brad Reid highlights the three new pacing sires, and the three new trotting sires will be profiled on Wednesday. 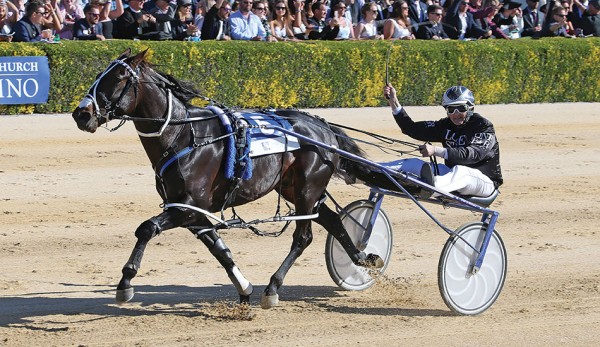 The highly anticipated sales debut of the greatest New Zealand pacer since Christian Cullen is almost upon us.

Lazarus N was a pacing sensation, capable of performances we may never see again in this part of the world such was his dominance.

The fact he only ran outside of the money once in 45 Southern hemisphere starts, with 40 of those races at Group level gives you an indication as to why Mark Purdon labelled this horse the best he has ever put a pair of hobbles on.

28 group race wins, 16 of them at G1 level in three different countries is something else. And while his demolition of two New Zealand Cup fields is firmly in mind, possibly his greatest performance came in defeat.

I implore you to find a comfortable spot and re-watch his run of the Freemantle Cup in 2018. On a tight turning track where the races are dominated by those on the marker pegs, he sat three-wide without cover for three laps around Gloucester Park and has gone down a lip in a star studded field.

The sale of Lazarus to North American owners gave him an opportunity to put the New Zealand breed on the map and he didn’t disappoint when some of the others before him fell short.

If there was any chink in the armour of the champ, it was possibly over the shorter course mile racing where he came unstuck, for instance in the Miracle Mile. That race was run in a Southern Hemisphere record mile rate, a time of 1:46.9 that has yet to be eclipsed.

Lazarus however silenced the doubters and won on debut in the $325,000 Dan Patch downing the seasoned North American free for allers in 1.48.4.

While his North American career was short and sweet, his battles with McWicked left a lasting impression and set him up for an international career as a shuttle stallion in two continents.

Lazarus served an incredible book of mares that included the likes of world champion mare, Worldly Beauty, a full sister to the dam of Captaintreacherous and Artistic Vision, dam of dual hemisphere stallion, Rock N Roll Heaven, and Artstopper, dam of siring sensation, Always B Miki, among others.

Unfortunately, his time at stud Down Under has been a head scratcher with fertility issues standing at Yirribee Stud leaving everyone involved scratching their head, and ultimately seeing his Southern Hemisphere deal with Club Menangle terminated.

76 New Zealand mares were served in his first year at stud producing an underwhelming 17 live foals. While the connections, breeders and fans of the stallion would have undeniably liked a better outcome, we are fortunate that this years yearling sales will present an opportunity for 10 lucky purchasers to take home progeny of the champion pacer. His catalogued lots are;

2: Unnamed, filly out of Taylor Bromac

18: Sting, colt out of A Chance To Dream

50: What About Me, colt out of Dreaming Spires

209: That Tusitala, filly out of That’s Hunting Pink

219: Briar Maguire, filly out of Unrehearsed

226: Glitterati, filly out of Wat A Woman

251: The Lazarus Effect, colt out of Brook Street

293: Jeremiah, colt out of Flyover

383: Uniquely, colt out of Real Wings

Lazarus’ yearlings sold incredibly well at Lexington last year with an average of $55,895 from 19 yearlings and he was the second leading pacing sire behind Captaintreacherous after two days, an incredible achievement for an NZ Bred.

Demand should be high at Karaka and Christchurch and we can’t wait to see his stock in the ring. 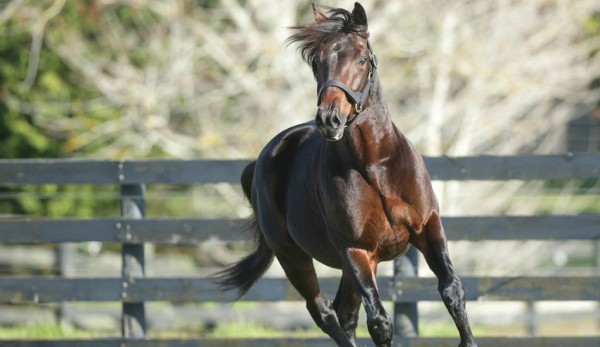 In an outstanding race career, Ultimate Machete’s flagship victories were:

The NZ Sires Stakes Three-Year-Old Final at Addington on NZ Cup Day – where he announced his arrival as a rising star. His winning performance was nothing short of phenomenal, being caught out wide and just keeping rolling to be far

too good in what was a New Zealand record for 1950m at the time. It is regarded as the best ever performance in the history of the race.

Twelve months later, in the NZ Free-For-All on Show Day at the same venue, he did what many thought impossible by sitting outside Tiger Tara before winning the home straight war to claim victory – and in doing so, reclaiming his New Zealand record for the 1950m distance (2:15.7, a 1:51.9 mile rate).

He then ventured to Perth where he monstered the Group One double for four-year-olds in the WA Classic and the WA Golden Nugget – wonderful efforts by the big horse around the tight Gloucester Park circuit and a testimony to his gait. He then ran a close up fourth in the Fremantle Cup before injury curtailed a blitz on the Victorian classics.

As a two-year-old, his second by a ½ head in the NZ Jewels, after being wide early then working to the lead, was a precursor to what would be a wonderful three-year-old season.

The other highlights to his three-year-old season were equalling the all-age New Zealand 2200m record (2:36.1) in winning the NZ Yearling Sales Series 3yo Final, winning the Alabar Classic and the NZ Flying Stakes (53.9 last 800m) as well as finishing second in the NZ, Northern and NSW Derbies.

His grandam is the NZ Broodmare of Excellence winner, Maureens Dream, who is a half-sister to the excellent sire Tuapeka Knight. This is a prodigious family made famous by renowned breeders, Tuapeka Lodge. Ultimate Machete is one of its proudest sons.

He is represented by four quality lots at Christchurch and Karaka;

93: One Life, colt out of Martine Maguire

216: Usain, colt out of Tuapeka Maddy

234: Franco Atilla, colt out of After Party

378: Sky High, colt out of Princess of Diamonds

Worth mentioning is the Tuapeka Lodge bred colt out of Tuapeka Maddy. She is bred on a 3x4 cross to the wonderful producing mare, Maureens Dream. ‘The Rasmussen Factor’ refers to inbreeding to superior females through different individuals and is more commonly seen in North America with the likes of A Rocknroll Dance and Sportswriter bred on these lines.

While it can be produced by mating the likes of an Art Major mare over Captaintreacherous (Rodine Hanover), it is less common to see the double up on the bottom line of the pedigree as it is with this colt. 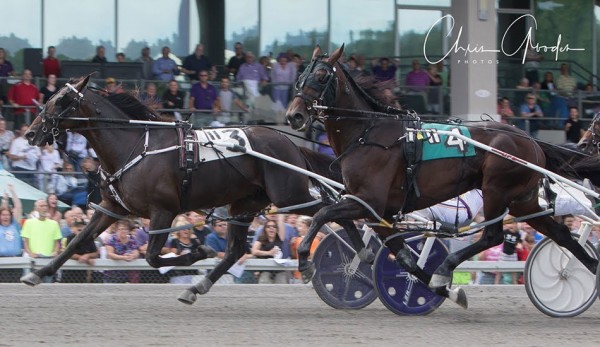 The announcement of Fear The Dragon’s availability via frozen semen at Macca Lodge was an incredibly exciting one for down under breeders with the champion son of Dragon Again representing bloodlines not readily available in this part of the world.

Fear The Dragon is by the deceased great stallion Dragon Again, who has sired the winners of almost $140 million to date. They include 10 millionaires and 38 winners of $500,000 or more including the richest harness racing horse in history the outstanding Foiled Again ($7,624,772).

On his dam’s side, Fear The Dragon is extremely well bred being out of the Stakes winning Western Ideal mare Armbro Cinnamon who is the dam of six foals for five winners. She also produced the good Stakes winning mare Cinamony ($532,404). His second dam is the Matt’s Scooter mare Mattaroni ($744,481) who was the Dan Patch, Nova 2YO Pacing Filly of the Year in 1998. Mattaroni is the dam of eight winners of $1,365,475. Mattaroni is a half-sister to Village Jewel (by Abercrombie) who is the dam of the top stallion Village Jasper.

In his race career, Fear The Dragon had just 29 starts as a two and three-year-old winning 17 times with seven seconds and two thirds for $1,720,297, an excellent total in a brief career.

As a two-year-old he won five of his 11 starts including the $140,000 Elevation Pace, Arden Downs Stake and a leg of the Pennsylvania Sires Stakes.

At three he was a multiple Grand Circuit stakes winner. He won the $1,000,000 North America Cup (elimination and Final) defeating Downbytheseaside and Huntsville as well as Filibuster Hanover in taking his lifetime record of 1:48.4.

He was the second highest overall stakes winner in America in 2017 and won every race where the ‘big three’ of Fear The Dragon, Downbytheseaside and Hunstville all raced together.

His first crop of two-year-olds finished 12th on the North American Sires list for earnings won which speaks to the quality of stallion Fear The Dragon and the bloodlines he possesses.

His first season at stud in New Zealand produced a remarkably high 74% live foals (43) from 58 mares served which is a strike rate impressive comparatively to any of the fresh and chilled options available.

He is represented by five quality lots in Christchurch:

232: Fearlessly, filly out of Ardenart

249: Legendary, colt out of Arden’s Rose

300: Unnamed, colt out of Getting Closer

313: Unnamed colt out of Gracy Lady

335: Unnamed colt out of Lillian

Three of the catalogued lots brought to the sales are from the draft of Macca Lodge, with the colt out of Lillian bringing with him a pedigree on paper that is as good as any in the sale.

The other two are from Arden Lodge which speaks volumes to the belief Principal John Stiven has in the stallion. The colt out of Arden’s Rose looks an incredible blend of the best North American bloodlines on offer being out of a Somebeachsomewhere mare, whose own dam is an Artsplace daughter of Broodmare of Excellence winner, Winter Rose.