Success for Kiwis across the Tasman 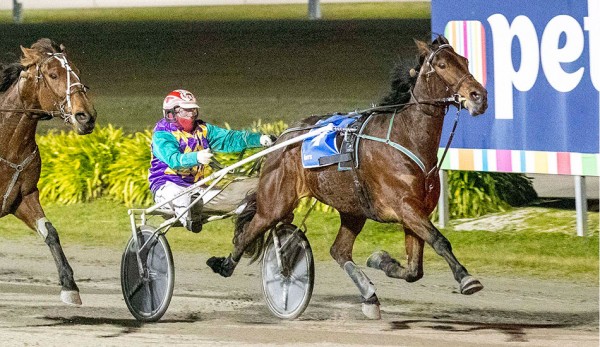 It was yet another milestone win for champion driver Chris Alford, who posted his 7500th career victory.

Topliner McLovin (30m) was the disappointment, circling the field early to sit parked, but he was battling on the home bend and tired late for eighth. 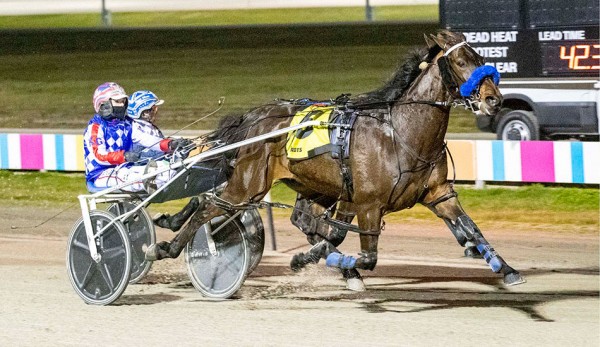 Gath won her first Victorian metropolitan driving title last season and joined Kerryn Manning as the only female to have done so.

Even with more than four months of this season remaining, Gath looks a moral to successfully defend the title.

Gath stretched her lead thanks to a personal best haul at Ballarat, driving five of the first six winners.

Four of the winners were for the stable she runs with husband, Andy: Zigzagzoo, Miss Fortunia, Fynn Frost and Tango Tara.

The other came for her other major supporter now, the powerhouse Emma Stewart and Clayton Tonkin barn with Nikki Louise.

“That’s a special night. I’ve driven four at a metro meeting before, but this is my best,” Gath said.

Tango Tara was the win of the night, sitting parked and still proving too strong for a good field in the $30,000 Group 3 Melton Pace final.

He keeps improving with time in Australia and that was by far his best performance since joining Andy Gath’s barn.

Gath’s record-breaking haul and dominance was a great story for the Victorian industry at the end of a trying week where three meetings were cancelled because of a huge COVID-19 scare.

Vampiro made it back-to-back August Cups when he used his blazing gate speed to lead from the outside draw at Gloucester Park last Friday night.

The seven-year-old carved-out some fantastic splits in front for driver Dylan Egerton-Green and scored by two metres in a slick 1min57.3sec mile rate for the long 2536m trip.

While Vampiro looks right back to his best, he may only be the third or fourth best horse in Team Bond’s stellar open-class crop. Minstrel and Mighty Conqueror are the two top seeds.

It was a Team Bond quinella in the August Cup with Patronus Star grabbing the eye with a big late finish for second.

In the other feature, Michael “Mouse” Brennan teamed with Michael Grantham for an all-the-way win with talented Bettors Delight mare Miss Limelight in the $30,000 Group 3 4&5YO Mares’ Pace.

Miss Limelight was outstanding at three, winning eight of her 10 starts with two seconds, but has found it harder this term with the latest win being just her second from 15 outings.

That's the Max Delight we’ve been waiting to see.

The former NSW Derby winner had been racing a tad below his best in a NSW stint with trainer David Aiken, but turned it around with a stunning free-for-all win at Menangle.

Maybe it was the Jack Trainor factor with the former Kiwi horseman taking the reins on Max Delight for the first time.

It gave Trainor an early double after he trained and drove Soho Tsunami to win race two.

He made it a treble later in the night when Champagne Prince caused a massive upset at $42.90 in the feature trotting race.

She had to burn early to hold the front in a 26.6sec split, but pinched a 31.4sec second split before being attacked down the back by a headstrong Class To The Max.

It was clear she was in trouble on the final bend and a superb, weaving drive from Nathan Dawson helped NSW raider My Ultimate Levi snatch the win for trainer Jarrod Alchin at $18.

The mile rate was slick but not stunning at 1min55.6sec.

Earlier in the night, it was great to see former Grand Circuit star Our Uncle Sam return to winning form.

There was only a whisker in it, but driver Shane Graham came with a well-timed run to snatch a nose win over the leader, Midnight Man.

Our Uncle Sam, who ran second in the 2018 Inter Dominion and 2019 Hunter Cup – both to Tiger Tara – hadn’t won since scoring at Bathurst on Boxing Day, last year.

One of the best wins of the night came when talented four-year-old Blacksadance upstaged a strong free-for-all field to lead throughout in a sizzling 1min51.8sec mile rate for 1660m in the opening race.

Chantal Turpin’s gelding fended-off challenges everywhere to score by a half-neck over the flying Crunch Time with local star Colt Thirty One close-up in third spoit.