The $50,000 Canterbury Classic showed the harness racing world what the connections of South Coast Arden have suspected for the last month.

The big horse is even better than when we last saw him destroying his Jewels opponents back in June and is a real deal IRT New Zealand Cup contender for next month.

Trainer Brent Mangos had thought as much when South Coast Arden came back into work after his brief winter spell and his main caretaker trainer and driver Natalie Rasmussen agreed after working him for much of the last two weeks.

But what trackwork for neither Mangos in the north nor Rasmussen in the south could prove was how South Coast Arden the racehorse was going to be under pressure and last night’s race erased any doubts about that. 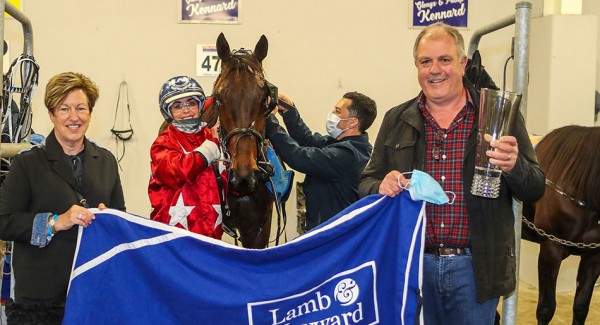 The big horse was safe away and relaxed, conserving vital energy back in the field as Pembrook Playboy raced to the early lead over Classie Brigade with favourite Self Assured handier than expected in the one-one.

After some mid-race moves South Coast Arden had to sit parked the last 1000m and Rasmussen said she had to chirp him up to get there but he was still too strong for the leader with Self Assured sprinting well into third.

“He is a better horse this time in,” nodded Rasmussen.

“He is bigger and stronger but perhaps most importantly he is more relaxed.

“He was so relaxed when I moved I had to ask him to quicken up to get parked but that is a good sign for races like the Cup.

“So he is far closer to the all-round package now. Just a lovely big horse.”

The win saw the TAB re-open South Coast Arden a $3.50 second favourite for the Cup on November 9 but that was quickly snapped up and he was into $3.20 last night.

He is stabled with Mark Purdon and Hayden Cullen but with Rasmussen doing much of his trackwork and talking daily to Mangos, who is trapped in Auckland and may be for some time yet depending on alert levels and what they means for Aucklanders travelling.

So when Mangos can head south to train his big stable star as well as take his reins on raceday is unknown and if it is not before South Coast Arden’s next start on October 15 who knows, maybe Mangos will be happy to leave Rasmussen in the sulky for the Cup?

“I haven’t discussed that with Brent and we will all do whatever he wants as this is his horse, we are just enjoying looking after him,” said Rasmussen.

Another decision will be whether South Coast Arden stays on the unruly all the way through to Cup time, with his next two starts likely to tell that tale.

“I think Brent is keen on the 15th here at Addington and then he might wait to see whether the Kaikoura meeting goes ahead there or moves to Addington, and if it did that he could even go the Kaikoura Cup. But only if it was at Addington.”

As dominant as the winner was Pembrook Playboy was solid and will probably be at his most potent when Nathan Williamson can drive him with a sit while Self Assured was excellent considering Purdon told anybody who would listen he was vulnerable.

With the Spring Cup at Alexandra Park next Friday, the road to the Cup has well and truly started.