Deny Everything goes four in a row

Deny Everything has delivered his fourth win in a row, with yet another impressive performance at Addington last night, beating the likes of Darling Me and Suzie Rocks in the process. 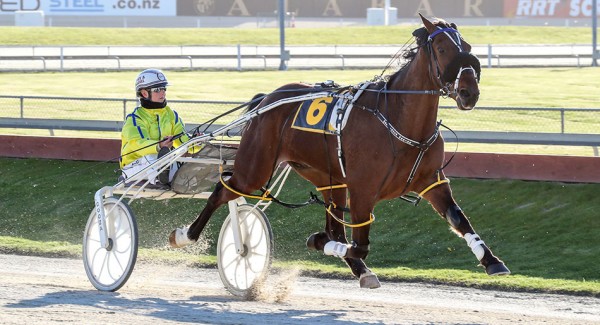 The son of A Rocknroll Dance has won a hat-trick this campaign, such has been his form that his breeder/owners might be in for a bit of fun over the summer.

For Damian Love and his father Neil, they are just thrilled to see the Mark Jones trained pacer back at the races after almost two years between his first and second win.

“It was really great to get a winner at Addington again,” said Damian Love.

The five-year-old gelding started racing in October 2019, winning his first race at start number 4 at Oamaru. His next wins weren't until his recent double at Methven and Addington in September this year.

“He’s had a few problems which have meant we’ve had to be patient, but time has been his best friend being such a big horse. We were never too worried about rushing him back when he had some niggles in 2019 and I guess he is repaying us for it now,” he said.

Deny Everything isn’t just paying back his owners' patience, but rewarding the faith they placed in his dam Lecerne Lil in giving her a shot at stud.

It might be cliché, but Deny Everything is proof of the fact there are no rules in breeding.

Start with the fact his mother is by the three-time Derby winner in Ginger Man.

A total of 98 foals produced 18 winners for Ginger Man in this country but nothing of any notoriety.

For Lecerne Lil’s $12,060 in stakes to be his highest New Zealand earner from his two decent crops suggests he will be remembered much more favourably for his racing career then he will his siring accomplishments.

They say it takes two to tango, however the maternal family of Deny Everything doesn’t jump out at you either having to go back three generations to find a winner besides his dam, Lecerne Lil.

Unperturbed and blissfully unaware of her paternal shortcomings, Lecerne Lil is fashioning herself a fine record in the New Zealand studbook as a 100% producer for the Loves. 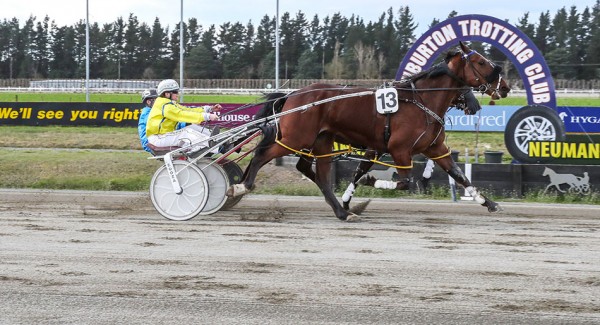 Last Friday night's winner is one of six for Lecerne Lil and spans a near two decade breeding journey for Damian Love and his father.

“Dad (Neil) lives in Dunedin but he is very much still getting a kick out of the horses having gotten involved with his workmates with shares in some pacers way back in the 80’s,” said Love.

Neil acquired a mare and bred a couple of self-described ‘slow ones’ and the passion for the sport was passed down from father to son which ultimately led Damian Love to taking out his training licence in 2003.

“My partner is Sally Graham and we live at her father Bruce’s property at Kilsyth Lodge. He’s had a lot of good horses over the years like Quality Invasion and Racey Product and has a heap of knowledge when it comes to racing and breeding.

“I work as a printer in the evenings and just do the horses during the day. I usually have one or two in work and have a couple in work for Bruce and it works out quite well,” he said.

Love’s sole training victory came in the shape of a trotter called War George (Peoples Blue Chip – Kinvarra) in 2006 at Motukarara and led to Love breeding from her dam Kinvarra without a lot of luck. However Lecerne Lil has managed to fill the void quite nicely in the years since.

“I used to help Andrew Stuart out at his stable and have a couple in work myself. Dad and I had a two-year-old with Andrew called Ochil Hills (1999 g Road Machine - Bell's Butler) that we qualified and sold to Australia.

“We were looking for another horse to race and Andrew had this Ginger Man mare available who was showing a bit at the time, so we bought into her as a replacement,” he said.

“She showed a lot of promise but delivered only a little I guess when you look at her racing record. She won a couple of races at Nelson and another at Thames but it was becoming apparent she wasn’t going to be a star. When she started to have some issues we decided to retire her and send her to the broodmare paddock,” he said. 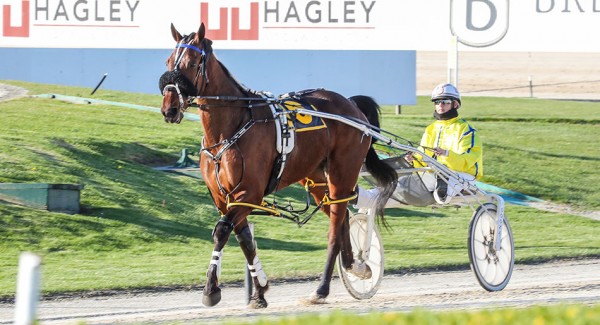 Lecerne Lil retired in 2005 with a record of two wins and five placings from 36 starts which was more than her three siblings out of Agenda (Payson's Brother - Rosa Bella) could say, with a full brother and two half-sisters by Tinted Cloud being unraced.

While the maternal line for Lecerne Lil was sparce with winners, she had some good blood further back with the likes of Lordship, Bachelor Hanover and Light Brigade in her pedigree providing an engine room to be built upon.

By Vance Hanover out of the Smooth Fella mare, Smooth Ginger undoubtedly added further building blocks to the foundation of Lecerne Lil’s production that was to come.

Above all else, her genetic makeup meant that regardless of the consort, the resulting cross was likely to be very much an outcross with a lot of ‘hybrid vigour’ as Jim Dalgety likes to say.

After missing twice to Mach Three and I Am A Fool, Lecerne Lil produced her first foal to the unassuming sire Cammibest with a colt by the name of Definitely Maybe in 2005.

“He was a lovely horse who won a race for us here and basically never missed a cheque in six starts before we sold him to Australia.

“He went to West Australia and won another nine over there and was good enough to race in the Golden Nugget against the likes of Bonavista Bay and Captain Joy. He came back a few months later and won fresh up in a 1:55 mile rate but broke his leg a day later which was awful, he probably could have done some much better things,” said Love.

Her second foal Indefinite was by Live Or Die, and typical of a lot of the stock by that sire, was an honest bread and butter type who picked up a win and 10 placings from 39 starts.

“I trained him for a lot of his career but it was Greg and Nina Hope that had a bit of success with him and won a race at Reefton. He could always trot around home so I qualified him as a square gaiter but we only managed the one placing in that gait,” he said.

The dual gaited nature of Indefinite was the inspiration for a breeding experiment down the line from Lecerne Lil which we will come to in due course.

The third foal was a Falcon Seelster filly called Swiss Lass who Love trained himself for a good chunk of her 20 start career.

“I qualified her myself and did a lot of the work with her before giving her to Greg and Nina Hope for a little while and she managed to win a race at Addington in their colours by five lengths,” he said.

“I got another couple of placings out of her but she wasn’t showing a lot and being by Falcon Seelster was one we always wanted to breed from so we retired her pretty early and she has a two-year-old colt by A Rocknroll Dance on the ground and a weanling filly by Vincent.

The two-year-old out of Swiss Lass is a three-quarter in blood to the impressive Addington winner Deny Everything, but that is where the similarities end.

“He’s just a completely different horse and just an honest, average size whereas the other guy is a bit of a monster,” he said.

The fourth foal by Lis Mara was the last the father and son bred in conjunction with Andrew Stuart and the mating produced a filly called Forgot To Remember.

“Andrew Stuart ended up taking ownership of Forgot To Remember and she was quite a neat wee thing. She was dual gaited and won a race as a pacer but also won a couple of races trotting and a couple more races trotting in Australia after she was sold there,” he said.

In 2013, Damian and Neil Love took over Stuarts share in Lecerne Lil and decided it was time to up the ante and give their mare a date with the best available.

Before being served by Bettor's Delight she had produced four winners for four foals with only Falcon Seelster being what you might deem a commercial stallion.

“He wasn’t standing for $25,000 like he is now but as we were only breeding every second year it makes it a bit easier financially to turn them over.

The result was Get It On, who won his second start for Anderson and Dexter Dunn at Forbury Park in March 2018.

“He’s always had his fair share of problems that horse. He had colic as a yearling which I think may have stuffed him a bit but he’s my hobby horse now and he goes a few good races and can go a few average ones as well but that’s racing isn’t it?” he quipped.

Get It On may never end up in the pantheon of top performers sired by Bettor’s Delight, but he has a race win to his name and more importantly put runs of the board for Mum and continued her 100% strike rate.

The only progeny out of the mare who is yet to get on the board is a trotting bred filly by the name of Lil Miss Muscles.

She qualified at Rangiora back in May as a three-year-old before being given time to strengthen up and given some of her pacing bred siblings have won races in the trotting gait, the decision to send her to Muscle Mass wasn’t exactly a random experiment.

“Lecerne Lil could always trot a wee bit at home and I use to joke with Andrew all the time about breeding her to Sundon. I was reading up on Muscle Mass a little while ago and thought bugger it, we might as well give it a crack.

“She qualified pretty good about five seconds under time for Mark Jones and I’m just jogging her up a bit at home before I send her back to him,” he said. Watching the qualifying trial it’s hard to imagine the filly being out of a pacing mare, such is the fluidity in her gait and will be one to watch as she looks to keep up the 100% record of her dam.

While this is a family that doesn’t necessarily have any star power as of yet, you get the sense that it doesn’t worry Love and his father in the slightest.

Lecerne Lil has already defied any reasonable expectations and can lay claim to providing Ginger Man with over 70% of his credits as a broodmare sire.

Lecerne Lil is set to go to stud one last time and it looks like she will have a date with leading North American two-year-old sire, Downbytheseaside with the Loves yet to decide on whether her daughter Swiss Lass will be bred this season.

After last night's win  Deny Everything is likely to be given a spell to be set for a race over Cup Week.

For a family that could easily have never been, the best might be yet to come for the progeny of Lecerne Lil and the Loves.

Lather Up and support Life After Racing

Unlike Lather Up, not every standardbred can be the fastest horse in the world, but they all have the right for a chance to have an enjoyable life once their days in the racing stables are over.

Keeping faith in Washington VC has led to Southland breeder Cleland Murdoch enjoying the thrills of racing what could be his best horse.