She Reigns supreme at Cambridge 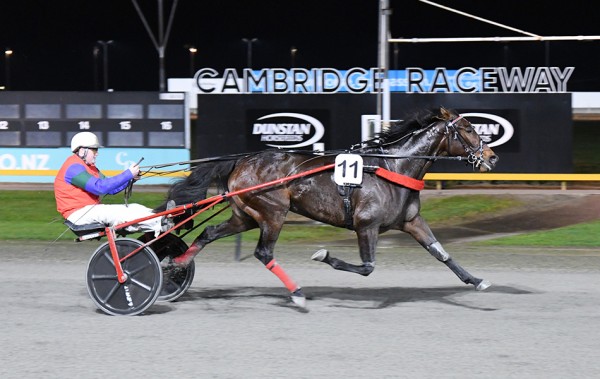 She Reigns has all but secured the Dunstan Cambridge Horse Of The Year crown after her victory in the Dunstan Horse Feeds Handicap Trot (2700m) at Cambridge Raceway on Friday night.

The Graeme Rogerson-trained mare had to overcome her 50m handicap, but made light work of her opposition, running away to a comfortable eight length victory in the hands of Rogerson’s stable foreman Dylan Ferguson.

“She got a good trip, that was the difference tonight,” Ferguson said. “Last start she had to go three-wide by herself from the 700m, whereas tonight she got sucked right into the race. When you can save her for that last 400m, she has got a lethal sprint on her.”

The win puts her five points clear of the former Arna Donnelly-trained The Banker, with a further seven points back to New York Minute in third.

Winning the Cambridge Horse of the Year title has been a major goal this season for the Rogerson stable, and Ferguson said it is hugely satisfying to get the lead with two meetings to go.

“I got great satisfaction from that win tonight because we have chased the Cambridge Horse of the Year hard and I think she deserves it after racing off those big handicaps,” he said.

The spelling paddock now beckons the 11-win mare, whose future racing career could lie across the Tasman.

“She has been stuck between a rock and a hard place here because she has always been just a notch below the good ones,” Ferguson said.

“The Cambridge Horse of the Year has been our goal with her and fingers crossed we have done enough to seal that now.

“The immediate plan is to give her a short break and we will have to sit down and discuss her future, whether that be in New Zealand or possibly overseas.”

Friday’s victory was Rogerson’s 23rd of the season, his best tally in several years, and Ferguson said there is plenty to look forward to with a lot of young talent in the barn.

“We have had a really good season. All the staff do a great job and that shows with our results this year,” he said.

“Classy Operator being competitive in the Young Guns was the big highlight for us. We have been competing with the older horses, but to have a young horse come out and do what he did so early, hopefully that is a sign of good things to come for us.

“I am looking forward to next season, we have got more young stock to roll out, so that is our main goal. We have got 10 yearlings, so hopefully we have picked a good one out of them.”