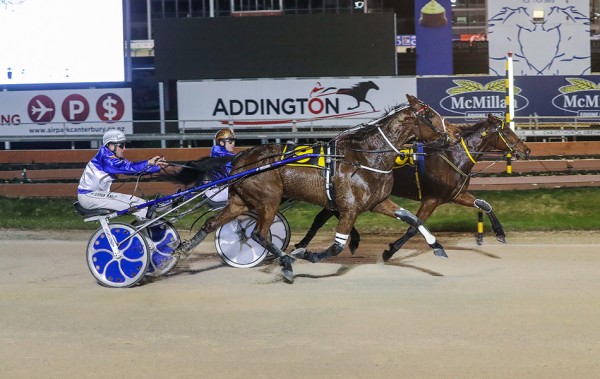 Perennial bridesmaid Sunnivue Phileah put a stop to her series of placings with victory in the Mid-Winter At Addington Trot (2600m) at Addington Raceway on Friday night.

The daughter of The Pres had placed in her previous four starts and owner-trainer Steve Ashton was delighted to get the elusive win, particularly in the fashion it was achieved.

Sunnivue Phileah didn’t have an easy time of it, sitting parked for the majority of the trip before she headed pacemaker Unique Marshall turning for home.

She was able to kick clear of her rivals by several lengths before Rogie Falls began to eke into her lead, but the finishing post came up too quick and Sunnivue Phileah held on to win by a long head.

“It was a top run from her, she sat parked for a long way,” Ashton said.

“I thought she might have needed some luck, but she didn’t get much of that and she still won.

“She is tough. She pins her ears back and wants to do it, so you can’t ask any more than that.”

With a series of placings, Ashton was confident of another bold showing on Friday and admitted he was surprised her odds were not a lot shorter with bookmakers.

“I thought she would have been favourite, but she wasn’t, so that was good,” Ashton said.

While the win made Ashton’s 10-hour round trip from his Portobello property worthwhile, he said the victory was made even sweeter having been able to share it with his grandson, Lucas, who works for Leeston trainer Paul Nairn.

“We left at 9:30am this morning and got to Paul Nairn’s at 2:30pm. Lucas came to the races with us and he was able to enjoy the win as well, so that was great.”

Ashton spends plenty of time on the road with Sunnivue Phileah and he said she handles it like a professional.

“She is the best horse I have ever had to travel with, she takes it in her stride really well,” he said.

The victory was Ashton’s 49th as a trainer and he is hoping he will be able to bring up his half century in the near future.

“There is one more to go, so let’s hope it doesn’t take too long,” he said.