Plan B works for The Kaik 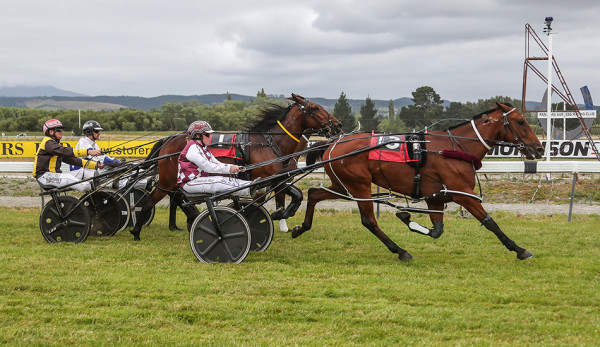 Some quick thinking from trainer-driver Kimberly Butt helped grass track specialist The Kaik bounce back to winning form at Rangiora on Sunday.

The seven-year-old is almost exclusively driven to produce a sharp late sprint, but a slow pace in race 11 saw Butt switch to plan B.

The Kaik rocketed around the field in the back straight before digging deep to notch career win 7 in his 87th start.

“It surprised me that he stuck on and went to the line as strong as he did,” Butt said.

“It was one of those races where they were really walking going into the back straight.”

“When Johnny Morrison [driving Comfortably Numb] moved in front of me I thought bugger it.”

“It had been very much a leader-dominated track and just about everything that won today was handy.”

“So, I thought we are not going to get anything back here.”

After making her quick move around the field, Butt was hopeful rather than confident her pacer would kick on and win.

“I wasn’t sure at the top of the straight if he was going to get it.”

“But he found another gear and was getting away from them at the end.”

“I guess because he gets driven quietly all the time every now and then you can throw a tougher run at him and he handles it.”

“He had dropped right back in grade too, so that always helps.”

Butt will look for his sixth and career win number 8 by bypassing the horse’s usual trip to the West Coast Christmas circuit.

“I think we might miss the Coast this year, which will be a change for him because he has gone the last three years.”

“I think we will look at the Motukarara meeting on the 29th [of December].”

Having first raced as a two-year-old in 2016, The Kaik seems to have been around for an age.

As he approaches his 100th start the pacer is still feeling good and working well, as his victory would suggest.

“He is seven now, but it feels like he has been around for a long time.”

“He hardly ever goes a bad race, if he does you know he is ready for a break or something is bothering him.”

“He is really easy to have around, he doesn’t take a lot of work and he doesn’t mind the racing either.”

Butt works The Kaik around her commitments at Kentuckiana Lodge.

The horsewoman recently transferred to the stable where The Kaik started his career after a stint with Brad Mowbray.

“I have been at Chrissie Dalgety and Nathan Purdon’s for a couple of months now and I am really enjoying it.”

“They were looking for staff, I didn’t have any intentions of leaving the Mowbrays but Chrissie came to me with the opportunity and I thought it was a good one.”