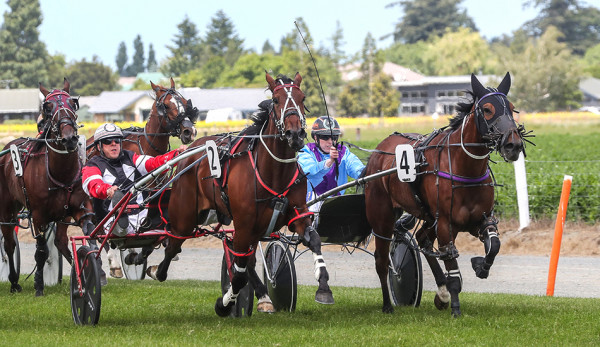 But it sure took a while to get there and it would be fair to say that John James Preston has been a bit of a challenge at times.

Actually a lot of the time he has been a complete pain in the butt.

A lot like the television character he is named after – Mr Big in Sex and the City.

Jessica has been doing a few horses since her father Paul began taking steps back a few years ago, particularly since the retirement of his good mare Clasina Maria.

John James Preston was one of the first she took on, training a few at a time with help from dad while doing three mornings a week with Bruce Negus and also juggling a couple of part-time jobs in the afternoons at local pharmacies.

John James Preston, the foal from a mare that Paul bought for $300 at the first and only ‘silent auction’ at Addington, hadn’t done much at all when he got his hind leg caught in a gate as a two-year-old.

“He went on the backburner for a good while after that and while the injury was mostly superficial, you can still see signs of it,” said Young-Grant.

“He was a late three-year-old and almost four when we finally got him in the cart.

“He was nice enough at that point, but did take a while to learn to pace.”

The trials and tribulations had started a while earlier when John James Preston was gelded however.

“(Vet) Donna Williamson did a couple for us that day and he got the same dose (sedative) as the other horse, which was 17 hands.

“But half way through the procedure he was trying to jump up – we learned that day that he must metabolise drugs rather quickly – so he needed even more sedation to knock him out again.”

Along the way, Young-Grant also learned the hard way that John James Preston does not like nails going into his feet.

“Dad taught me how to do the shoeing as you can save quite a bit of money doing it yourself.

“But with him I could only do one shoe a day because each and every nail was a drama and he took so much out of me – he was a real pain in the butt.”

Young-Grant finally got John James Preston to the workouts in August last year as an early five-year-old, but that would just be the start of more dramas.

“In the first workout it soon became obvious that he didn’t like the grit in his face, so I had to take him right around the field and into the lead.”

They went 3.11 and came home in 27.5 with Scorcha coming out of the pack to beat John James Preston by a neck.

“In the second workout there was only three in it and he broke when leading up when he went to sprint.

“The third workout had eight starters and I think he got a bit overwhelmed by the big field.

“He was also hard in the mouth and it was like having no steering wheel – he was all over the place.

“Dad said to me afterwards ‘there’s something not right with that horse’ so we had Donna go over him.

“It turned out he was sore in the other hind leg because he was off loading.”

John James Preston wasn’t sighted again until May this year, or nine months later, when he qualified by winning a heat at Addington.

He was good that day, leading from the mobile before trailing and scooting up the passing lane.

He was ready to race, and in to go at Addington in early June, but that didn’t go well for a start either.

“There was a false start and he got really wound up and wouldn’t turn around for the second go, so he was late scratched by the stipes.

“After that we changed his bit and put one of those compression hoods on that help keep them calm.

“He still wears one now and he’s never had the ear plugs pulled actually.”

John James Preston had been sent back to the trials and did finally make his debut at the Kurow meeting in August, where he trailed from post one in a mobile and finished third to the All Stars’ hotpot Demand Respect, who was then sold to Tasmania.

After a second at Addington to Susie Reignmaker, John James Preston was third at Methven and seventh at Addington in September.

“Dad said we’d better get his blood done and he did have a virus, which was probably coming on at Methven.”

“He was a shade disappointing there again despite being up against race winners and going 3.13.

“I noticed he wasn’t walking right afterwards and then he galloped at home, which was not like him.

“He had some bruising around the coronet band and Addington was very hard the night he raced.

“So we poulticed the heel and it burst out not long before Methven.”

So it can be seen that John James Preston has had quite a few issues along the way, and there’s also been quite a bit going on in his brain department.
“After he won was the first time he’s licked the bowl clean after a race.

“I know he’s shown some gate speed at times, but he’s still untapped in that respect as I’ve never really asked him to go.”

As such, Paul and Barbara Young will probably get him sold to Australia at some stage.

John James Preston is the third and last foal from Flash Under Fire, a daughter of Courage Under Fire from the family of the good mare Flashdance that won a couple of races for yours truly.

I’d bred a couple of colts by Life Sign from Flash Under Fire. I can’t recall what happened to the first one, but the second in A Life Under Fire quickly won a race at Mot and was then sold to NSW.

He won seven of his first nine races there and 50k but must have gone amiss a bit later.

I don’t recall how, but I do recall winning a free service somewhere to Mister Big, and bred Flash Under Fire to him because she was just a midget.

A bit later I gave up breeding pacers and threw what was left in that silent auction, and started breeding trotters as the manager of Love You’s frozen semen among others.

I gave up breeding entirely and managing the stallions when initially launching the Xpress, as I could see I was going to be far too busy for that carry on.

That and I’d eventually realised there was no future in it unless you had the land and could do a lot of it yourself.

Jessica tells me that Paul bought the mare for the foal, because he “liked the pedigree match”.

Subsequently my mother, Shirley, ‘rescued’ the mare and nowadays she resides on a farm with her near Ashley Gorge.

Grant-Young has 4-5 in work at a time while juggling her various other jobs, which of course includes the driving, where she racked up win No.100 with Aveross Majesty at Oamaru a few weeks ago.

She has just got the Diedre Don mare Hashtag Faye back in and is doing a couple of well-bred youngsters for Martin Pierson.

She had 24 wins in her last season as a junior five years ago, and is now married to Cameron Grant.

“He’s a townie and not really horse related, although his auntie was Lorraine Grant (of Rainbow Patch fame).”

Paul has pretty much retired, winning his last race as a trainer when Clasina Maria won the Marlborough Cup in January last year

He started out by working for Ted Lowe in the late 70s and drove good horses like Dundas, Samson, Stortford Lodge and Winning Note in those days.

Clasina Maria has just had a filly by Rocknroll Hanover, while another good mare for him a bit earlier in Roxy Bromac, is being bred every second year and has produced colts by Sportswriter (2yo) and Rock N Roll Heaven.

“He’s made his money by selling everything, and now he can afford to keep what he wants.”

That will probably include John James Preston for a while, because he’s not done here yet.