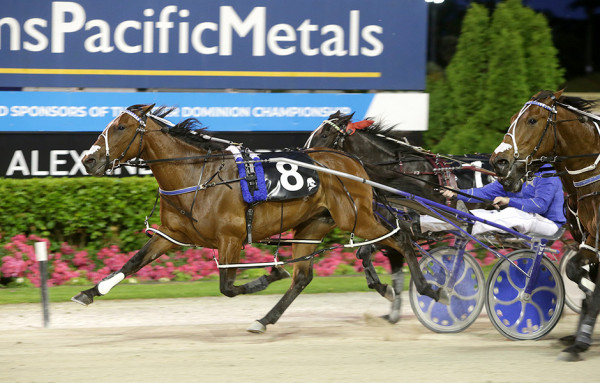 It may not have been the most dynamic win of Amazing Dream’s career but it was perfect as far as trainer-driver Mark Purdon was concerned.

The hot favourite led almost throughout to win the Caduceus Club Northern Breeders Stakes at Alexandra Park, with those who took the $1.30 odds feeling pretty good a long way from home.

But while she never looked like being beaten it was somewhat surprising how close stablemate Beyond Words ran Amazing Dream late in the piece, with even Dina Brown not too far away in third after sitting parked.

“But that was exactly what she needed. She won, didn’t have to work too hard and can go on to next week.

“And I am sure she will improve a lot with that run too.”

Considering Amazing Dream has a group one next Friday and then the Auckland Cup before almost certainly heading to Australia, an easy kill was the perfect start to her northern campaign.

“But we also shouldn’t under-rate Beyond Words. She is a pretty good mare and getting better all the time.”

Considering she had taken time to adjust to right-handed in her preparation last week, the fact Beyond Words pushed her stablemate suggests she will herself end up winning a major mares race at some stage this season.

The Breeders in some ways mirrored the other All Stars quinella of the night in the Sires’ Stakes heat when Bettor Twist led and looked to be under threat from Darling Me before holding her easily at the line.

This time Purdon was driving the second horse and admits at the top of the straight he thought he might beat Bettor Twist.

“But the winner was too strong at the line and she is our best filly at this stage.

“And she is going to be even stronger over longer trips like when she gets to the Oaks.”

Before then the three-year-old fillies have that Sires’ Stakes Championship at Alexandra Park on New Years Eve, which with the addition of the Mark Jones-trained pair of Braeview Kelly and La Rosa looks one of the races of the carnival.