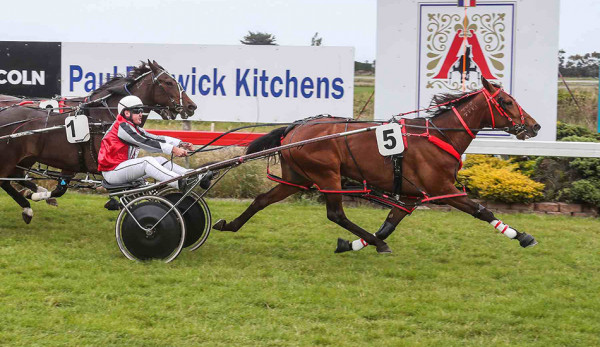 Perfect is the only way to sum up the first drive and first win of junior driver Daniel Roberts’ career behind Safe Zone at Motukarara on Sunday.

Roberts gave himself a perfect one-from-one strike rate in the sulky when giving the five-year-old a dream run in the one-one before launching her for her winning run on the home turn to win race 6.

The victory handed trainer Angela Washington the first victory of her career and it also ended a whirlwind week for Roberts.

Up until Tuesday night, the rookie reinsman was not even licenced to drive.

But, by Sunday he was a race winner.

“It is a big thrill, I think I was actually more nervous after the post than I was around at the start,” Roberts said.

“It is all happening before my eyes, but I am just taking it as it comes.”

Winning races is nothing new for Roberts.

The son of leading greyhound trainer, Craig Roberts, has prepared around 70 greyhound winners in his own name.

When asked to compare the thrill of training a winning greyhound to driving Safe Zone to win on Sunday, Roberts gave an answer that may surprise some of his family.

“I am saying this reluctantly, but driving a winner is definitely a much bigger thrill.”

“Harness might have got me hook, line and sinker after today.”

“But, we will see what happens going forward.”

Roberts has been working towards getting his junior driver’s licence while working for Weedons trainer Chris McDowell.

McDowell also enjoyed success at Motukarara on Sunday with Judgement Bay in race 5.

Like Roberts, the four-year-old also impressively won her racetrack debut.

Roberts recently left McDowell’s barn when an opportunity in the greyhound code came along.

That has meant the junior driver will take a wait and see approach to see how his driving career will fit around his new job.

“I haven’t really got too many plans, so I will just take it as it comes.”

“I was working for Chris McDowell, but I just finished there.”

“I was with him for about three and a half years, he has been really good to me.”

“I finished up there to take on a bit more of a full-time position with the greyhounds, which might have come at the wrong time.”

“I am hoping moving forward he might give me a few drives and then just see what happens.”

Roberts gave Safe Zone the kind of steer a veteran driver would be proud of.

After stepping away cleanly the pair took a trail behind Key Reactor and Joseph Gray to enjoy a perfect run in the one-one until the home turn.

“Leading into the race I was a bit nervous because all the ones to beat were drawn on my inside.”

“I thought I could get posted outside them and not be able to get across.”

“I didn’t really see Joseph’s one coming and I thought I might end up parked, which definitely wasn’t going to be an ideal run.”

“When he came around and gave me some cover I thought I could be a decent chance here.”

The horsewoman shares in the ownership of Safe Zone with her partner, Roberts’ father Craig.