Curry and his mate get the job done at Timaru 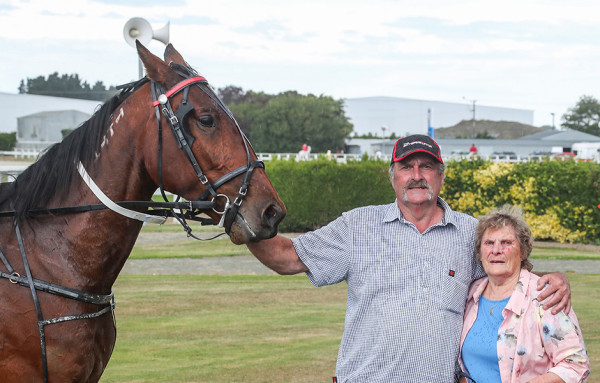 The five-year-old gelding is the only horse the Washdyke trainer has in work and Curry said he is making his retirement enjoyable.

“He is the only horse I have got now, he is my mate,” Curry said.

Kingsdown Atom secured Curry’s first win as a trainer at Methven in October and he added another at Phar Lap Raceway on Saturday when taking out the George Shand Memorial & Timaru Metal Recyclers Pace (2600m).

He began well from the ace draw for driver Matthew Williamson to take an early sit behind leader Bettor Believe It, who set the pace throughout.

Williamson was able to utilise the passing lane where Kingsdown Atom was able to overpower Bettor Believe It in the closing stages to win by a head.

Curry was thrilled with the win and said he was expecting a bold run from his pride and joy.

“He had been training well and he had a hard race at Addington last week, which topped him off nicely,” Curry said.

Curry bred and owns Kingsdown Atom, and he said he is delighted to be carrying on the Kingsdown name for his family.

While Curry has enjoyed recording his first training wins this season, they have not been his first in harness racing.

“Back in the eighties I drove Kingsdown Lad to win at Oamaru and drove a lot of Dad’s horses,” he said.

“I got out of it for 30 years and went to Australia and then (when I retired back to New Zealand) I thought I might get a horse,” he said.

“I am retired now, and it gets me out of bed in the morning.”