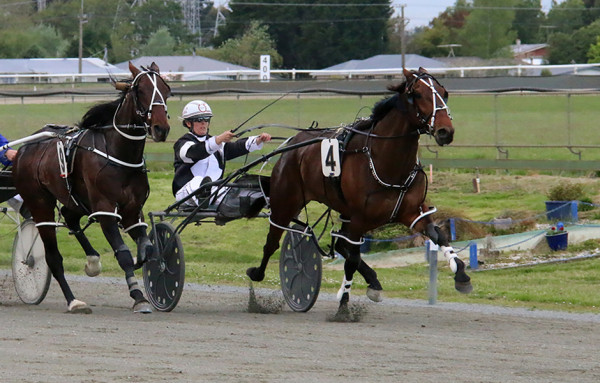 In a far bigger surprise than his strong front-running win in the Group 3 Southern Supremacy Stakes at Ascot Park on Thursday, trainer Mark Jones revealed the New Zealand Cup is the next target for Burnham Boy.

The pacer showed off his staying power to win Jones the second of Southland’s flagship three-year-old features, just minutes after Stylish Memphis took out the Southland Oaks Final.

After Burnham Boy ran to a victory in a 2700m mobile, it’s natural for Jones to look for another staying test for the pacer.

Few would have predicted the trainer would have revealed he has had his eye on the New Zealand Cup.

Especially considering Burnham Boy is not nominated for the 3200m feature.

But the Jones was quick to point out that it made sense to target New Zealand’s greatest race.

“He hates 1980m races and that is all that is around for him,” Jones said.

“I would start him in the cup if he made the field – we would pay the late entry fee.”

“It is probably more for the owners than anything else, but he is a good stayer and he would run a good two miles [3200m].”

Burnham Boy is not the only horse Jones is attempting to make a last-ditch effort with to qualify for a New Zealand Cup Week feature.

The trainer will start Majestic Lavros in the South Bay Trotters Cup at Kaikoura on Monday in the hope he will qualify for the Dominion.

Burnham Boy banked enough to cover a late entry payment for the New Zealand Cup thanks to a well-judged front running drive from Samantha Ottley.

Jones had a plan to lead and play to his pacer’s staying strengths ahead of the Southern Supremacy Stakes Final.

And he even told media of that plan in a pre-race interview.

“I told the press before the race what the plan was, so Sam only had to read it and drive to instructions,” Jones quipped.

When pressed for a more serious assessment of the drive, Jones heaped praise on both Ottley and Ricky May, who also gave Stylish Memphis a perfect run in the trail.

“Both horses were driven perfectly and that is why they are out there and I am sitting in the stands.”

Jones’ red-letter day, winning both the Southland Oaks and Southern Supremacy Stakes continued the brilliant start he has made to the new season.

Earlier this month he produced La Rosa to win the Harness Million for two-year-old fillies at Addington.

“It is a great result, especially when you set the horses for these races.”

“We have come down here plenty of times before and got beat, but today we were lucky enough to get the job done.”

Jones is not the only trainer eyeing a late run into the New Zealand Cup following Diamonds Day.

Owner Neville Cleaver is keen to press on to the 3200m event after Franco Santino equalled the aged male pacers’ 2200m track record at Ascot Park.

Franco Santino took out Diamonds Day’s fast class event for older horses when producing a gritty effort to win in a 2.39.6 time.

The Nathan Williamson trained and driven pacer will need a good bump up from his 21st place ranking on the latest order of entry for the New Zealand Cup is he is to start in the race.