May and Memphis combine for Oaks win 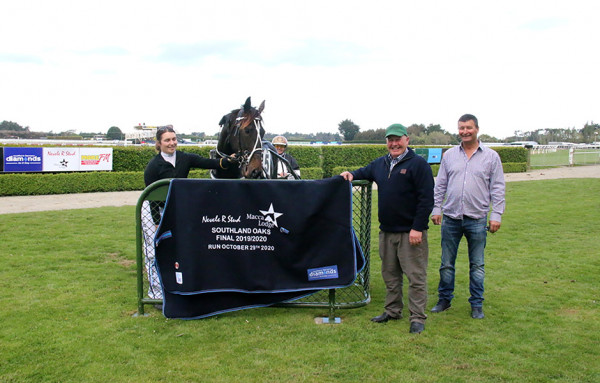 Driver Ricky May got the biggest thrill of his comeback to race driving when Stylish Memphis took out the Group 3 Southland Oaks Final at Ascot Park yesterday.

Stylish Memphis burst out of the trail to power to victory in the 2700m feature and set up a big day for trainer Mark Jones, who went on to take out the group 3 Southern Supremacy Stakes with Burnham Boy.

Stylish Memphis’ victory completed her epic reunion with May, who drove the filly the night before his well-publicised collapse during the Central Otago Cup in January.

Then, the pacer ran the second of two group 1 placings behind Amazing Dream in the Sires Stakes Championship Final.

Though Thursday’s event was not a group 1, to return to the sulky and drive the now four-year-old to win an Oaks was a huge thrill for May.

“That is a huge thrill, it was great to win that race with her.”

“I won the Banks Peninsula Cup with One Apollo and now to win this is a pretty big thrill.”

“It is great to be back to where I was.”

“I feel like I have been driving alright since I came back, but I haven’t been driving that many good horses.”

“But the nice ones I have been driving have been going really good.”

May showed his class with one of his typically patient drives.

When taken on early by eventual third-placegetters, Watch Me Now and Kirstin Barclay, he made the crucial decision to hand the lead away in what most would consider a bold move when driving a $1.80 favourite.

Stylish Memphis then showed how potent she is when getting such a soft trip after May angled her off the inner before the home turn.

“She proved when she went to Australia how good she was.”

“She is looking a million dollars and she is probably only going to get better with a wee bit more racing.”

“Mark has done a great job with her.”

Need You Now took second behind Stylish Memphis, fighting on bravely after having to sit parked.

Earlier on Diamonds Day, Dashing Major took out the group 3 Diamond Creek Farms after also enjoying a perfect run in the trail.

The half-brother to former star mare Venus Serena nosed out hometown favourite Ragazzo Mach in the most thrilling of finishes to win the $30,000 feature in just his third start for trainer Robert Dunn.

And the John Dunn driven three-year-old had to be sensationally quick to do it, coming off the back of the favourite Ragazzo Mach on the $30,000 feature’s sizzling 26.8sec last 400m.

“It was a good effort to get there when they were running the last quarter [400m] that quick,” John Dunn said.

Dashing Major will now he clash with star three-year-olds Krug, It’s All About Faith and American Dealer in the Sires Stakes Final on New Zealand Cup Day.